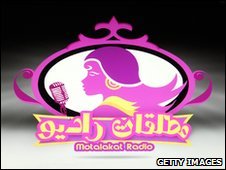 According to official figures, a couple in Egypt gets divorced every six minutes. The divorce rate is thought to be the highest in the Arab world.

Once considered a social taboo, the topic is starting to be discussed openly. There are clubs for divorcees, special magazines and a new internet radio station.

It took four difficult years before Mahasen Saber, 30, was able to end her unhappy marriage.

Afterwards she found herself the subject of gossip and disapproving looks.

Radio Motalaqat or “Divorcees Radio” was her answer.

“The woman who gets divorced is seen as the evil one, the bad one, not the man who made her take this step,” says Ms Saber.

“I set up the radio to make a bridge between women and men and the whole society here in Egypt or in any Arab country.”

‘I want a divorce’

In recent months, the station has attracted thousands of listeners in Egypt – with others tuning in from Morocco, Lebanon and even North America.

Programmes that have gone on-air include “You Misunderstand Us” and “Before You Say, ‘I Want a Divorce'” – making women aware of what’s involved before they take steps to separate.

Ms Saber insists everyone has to decide what is right for them.

“My mother, she used to say ‘You cannot get divorced. You have a kid.’ But in the end you have to decide what’s right. It’s your life, if you let anyone control it, you will live like a marionette,” she said.

Despite the stigma which is still attached to being a divorcee, Egyptian women increasingly initiate legal proceedings.

Family law, which is based on Islamic principles, was changed 10 years ago enabling them to get a divorce without their husband’s agreement by going to a judge. The practice is known as “khula.”

It requires them to give up their financial rights and hand back the dowry they received on marriage, unless they go through further drawn-out litigation.

Some 250,000 women are currently involved in court battles.

Sociologist Madiha Safty, from the American University in Cairo, suggests there are many factors involved in women seeking divorce.

“With more rights being given to women, the right to education, to employment – the idea of financial independence is very important here – she can easily have her divorce and be able to live on her own. That’s in addition to changing family laws giving women more rights,” she said.

“Society is very much concerned,” she adds, “because it has led to the breakdown of the family.”

Marriage counselling is beginning to take off in Egypt.

There are even television phone-ins offering relationship and sex advice, based on Islamic teachings.

While it remains easiest for Muslim husbands to instigate a divorce, a men’s association continues to campaign against khula.

At the Confidence Club for Divorcees, the approach is more pragmatic.

Group members are aware of the personal toll that results from a broken marriage and support each other with weekly get-togethers in Cairo.

Egyptian-American Hana Al-Medawi explains that when she came back from the US two years ago, she found her mother had not told anyone about her divorce.

“I don’t have a problem saying that I’m divorced. However, people do look at you, people do comment, people do judge,” she says.

“Finding the club was great because they’re like-minded.”

“Now divorce is becoming more accepted. We’re a country that continues to change.”

Still Egyptian culture is conservative and family-oriented and for many, finding marital happiness remains the goal.

“I’ve been divorced for over three years and I think I’m passed the feeling of being unhappy or sad,” says another club member, Ihab. “I dream to find someone else to share my life.”