Abu Abdullah spent years fighting a guerrilla war against the Israeli army in southern Lebanon with the militant group Hezbollah, but when asked to share a good war story, he just shrugs and continues with the official tour.

No one is surprised. The movement that began as a militia, grew to an army and now boasts an administration, security apparatus and infrastructure that rival the Lebanese state’s releases information only through official channels and carefully orchestrated events, like the inauguration of Hezbollah’s new museum and heritage trail in Mleeta, a former mountain stronghold with a tunnel system and a clear view all the way to the Israeli border. 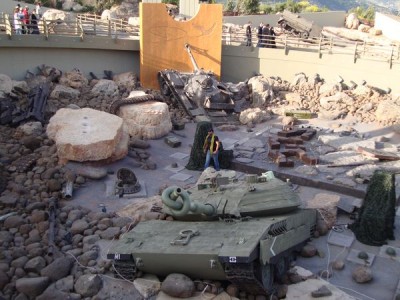 The trail begins with a descent into “The Abyss,” a massive interactive sculpture of rubble, twisted metal and Israeli tanks being swallowed up by the earth. It then winds through a forest, passing directly through the mountain in a complex tunnel network that includes a kitchen, living quarters and war room before opening onto Liberation Square.

Hezbollah may have evolved over the years into a sophisticated political machine, but the image presented in Mleeta highlights the humble foot soldier.

Our guide, Abu Abdullah, leads us to a small trench where former Hezbollah Secretary-General Abbas Musawi supposedly prayed before personally leading operations against the Israelis. Musawi was assassinated by Israeli forces in 1992, and a framed picture of him has been propped against a rock next to a small prayer rug, an AK-47 and a copy of the Koran.

Several yards down the trail, a medic tent has been erected where mannequins in military garb attend to a fallen comrade. Spread throughout the woods are rocket launchers, surface-to-surface missiles, mortars, jeeps, deactivated land mines and even some live ones (one area is cordoned off and yet to be cleared of Israeli cluster bombs dropped during the 2006 war).

Young boys from the Mehdi Scouts, one of Hezbollah’s youth programs that feeds into its armed forces, scrambled over rocks and sandbags to have their picture taken with grenade launchers and motorcycles.

Each scene or piece of equipment on display was accompanied by a plaque offering detailed information about the weapons and how they were used, and sometimes explicit justifications. One such described the group’s use of short-, medium- and long-range surface-to-surface missiles, “whose aim is to deter the enemy from targeting Lebanese civilians and infrastructure.”

The inaugural ceremony for the multimillion-dollar Mleeta complex, which covers more than 60,000 square feet and takes about an hour and a half to visit, was held Friday, just days before the 10th anniversary of the Israeli withdrawal from Lebanon. When it opens to the public Tuesday, Mleeta will be fully equipped with restaurants and gift shops. It will eventually include a suspended cable car across the gorge to the nearby Sujud mountain peak.

Previous exhibitions such as those commemorating the July 2006 war with Israel and the assassinated senior commander Imad Mughniyah or the permanent museum in the former Israeli detention center in Khiam, which was largely destroyed by Israeli shelling in the first days of 2006, were much smaller in scale.

The indoor exhibition also displays satellite images of the Tel Aviv airport and other crucial Israeli infrastructure, as well as a wall-sized chart of the Israeli armed forces’ chain of command.