Hariri to Pelosi: We share democracy, human rights and freedom 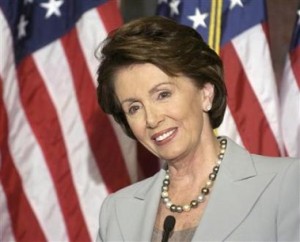 Before starting the meeting, Hariri wrote a word in the Congress Book of Honor with the following text: “It is a great honor to be here in this building with Madame Speaker. We share a lot together, like democracy, human rights and freedom.”

“The President has stated and the Congress agrees that the U.S. supports Prime Minister Hariri’s drive to realize the vision of his father, a sovereign, independent Lebanon, with strong democratic institutions, free to determine its own destiny. The US believes in helping the Prime Minister make his own mark for the people of Lebanon as they accomplish these goals,” Pelosi added.

“We will continue to stand with them in pursuit of peace and pluralism and a future of safety, security and stability for their children. We will work with the Prime Minister Hariri and all of Lebanon’s leaders on the challenges that are facing the country and the region, promoting peace between Israel, Lebanon and their neighbors and ensuring that Lebanon’s political system and its people are not endangered by the forces of violence and terrorism, implementing the principles of the U.N. Security Council Resolution 1701 which calls for permanent ceasefire between Hizbullah and Israel and Lebanon’s full right to a sovereign nation, free of foreign interference.”

For his part, Congressman Nick Rahall, who is of Lebanese origin, stated: “It is indeed my honor, as chair of the Lebanese caucus in the Congress, to welcome the Prime Minister to Washington. He is a courageous leader for his country, following in his father’s footsteps. He has specially taken some courageous moves to engage the people and the countries of the region. Thus, I join with the Speaker and our many colleagues of the Congress, who are friends of Lebanon, in welcoming the Prime Minister to Washington today.”

Hariri responded by saying: “I am happy to be here with the Speaker, Honorable Nancy Pelosi, on Capitol Hill, which is one of the greatest symbols of democracy in the world. I am confident that we will have a constructive and positive dialogue about the relationship that binds our two countries and I also look forward to discussing regional issues of mutual concern for Lebanon and the U.S.”

“I think Lebanon shares many common principles with the USA, our democracy, our freedom, our freedom of speech, our independence and our belief in human rights. We believe that those principles are worth fighting for and believing in. Those principles that we stood by all along — my father maybe paid his life for them — I will continue in the same venue that my father undertook. I will resume his legacy, hoping that our two countries will work together on all issues that are important for the region,” Hariri added.

Prime Minister Saad Hariri started Tuesday the second day of his official U.S. visit with a breakfast at his residence at the Four Seasons hotel attended by several Congressmen from the Friends of Lebanon caucus, as well as members from the official Lebanese delegation.

Then Hariri met with Deputy Secretary of State, James Steinberg. Attending were: on the U.S. side, Assistant Secretary of State for Near Eastern Affairs, Jeffrey Feltman, and U.S. Ambassador to Lebanon Michelle Sison. On the Lebanese side: Foreign Minister Ali al-Shami, Lebanese Ambassador the U.S. Antoine Chedid, Chief of Staff Nader Hariri, and advisors Mohammed Shatah, Hani Hammoud and Amal Mudallali.

Afterwards, Hariri paid a visit to the World Bank headquarters in Washington DC where he was welcomed by the WB President Robert Zoë lick.

The meeting held at the Bank was attended by ministers Raya al-Hasan (Finance) and Salim al-Sayegh (Social Affairs), as well as advisors Mohammed Shatah, Mazen Hanna and Amal Mudallali.

The discussion focused on the relation between the WB and Lebanon as well as the economic and financial situation.