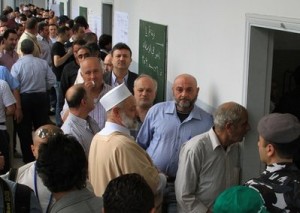 The local media started reporting some unofficial results based on exit polls and partial vote count.

The March 14 Mustaqbal-backed mayoral candidates have reportedly won all the seats in the city of Sidon, NBN TV reported .

Lebanon’s former PM and Sidon MP Foad Siniora declared that “Sidon has won” He added :” The results proved that Sidon wants a capable Municipality that will be able to face the challenges ”

Hariri : Sidon not for sale

The Hezbollah backed Saad supports the Popular Will list, which competed against the Consensus for Development list that Hariri and the Future Movement supported.

Saad has been brandishing vote-buying accusations since 1992, Hariri said, calling Saad’s allegations an insult to the people of Sidon ( Saida) . “People are not sold and Sidon is not for sale,” she added.

In areas which are predominately Shiites , Hezbollah and Amal backed candidates appear to be

In the areas that are predominately Sunnis , The March 14 backed candidates appear to be

Photo: Lebanese citizens, line up to cast their vote at a polling station during the municipal elections in the southern port city of Sidon, Lebanon, on Sunday, May 23, 2010.