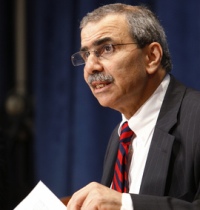 Lebanon’s Special Envoy to the U.N. Nawaf Salam, has denied that the United States had asked the Security Council to to start the discussion of a draft resolution on new sanctions on Iran.

During a phone interview with Asharq al-Awsat newspaper , Ambassador Salam said information that Lebanon had officially received a draft resolution on new sanctions was “completely false.”

Lebanon , which is a non member of the UN security council heads the council during the month of May

Salam said the U.S. ambassador submitted plans for a draft resolution to Security Council departments and distributed the text to Council members. “However, he hasn’t asked for a session to discuss it.”

Salam ruled out discussion of the draft law in the near future or during Lebanon’s presidency of the Council which expires midnight May 31.

Salam told Asharq al-Awsat that the agenda of the session scheduled for Monday does not include Iran .

About Lebanon’s stance from the possible sanctions, Salam said: “Lebanon believes that the Turkish-Brazilian initiative guarantees an opportunity and urges all Security Council members to deal with it positively.”

The deal brokered by Brazil and Turkey in Tehran to ship half of Iran’s low enriched uranium to Turkey for a swap with fully enriched reactor fuel did not satisfy the big 5 and for this reason the US prepared a draft to go ahead with the sanctions.

According to observers, the US realizes the sensitivity of the Lebanese situation with regards to Iran , because of Hezbollah and that is why the US is waiting till the first week of June to ask for a session to discuss the sanctions. The observers believe that the Iranian and Syrian backed Hezbollah will repeat what it did in May 2008 if Lebanon votes for the sanctions against Iran. On May 7 2008 Hezbollah occupied the western part of Beirut and tried, but failed to occupy the Druze strongholds of Mt Lebanon. Several people were killed during Hezbollah’s uprising which was described as a coup by the March 14 leaders