Hezbollah mobilizes in Lebanon ahead of Israeli drill 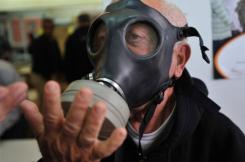 Hezbollah mobilized thousands of fighters in southern Lebanon on Friday in response to the week-long Israeli military exercises , an official from the Shiite group said.

The Israel Defense Forces (IDF) Home Front Command in concert with the National Emergency Management Authority (NEMA) will hold a weeklong nationwide emergency preparedness drill the last week in May.

This year’s drill , dubbed Turning Point 4, will focus on emergency response to massive rocket attacks throughout the country.

“After the Second Lebanon War, we concluded that the ultimate responsibility rests with the local authorities,” Deputy Defense Minister Matan Vilnai told reporters during a press conference in Tel Aviv on Sunday.

Vilnai emphasized that the exercises had been planned long in advance, and had no bearing on the Jewish state’s present relations with its northern neighbors

During the exercise, the Home Front Command will distribute gas masks in eight cities in preparation for a future scenario requiring rapid distribution.

On Wednesday, Israelis countrywide will be asked to enter bomb shelters and safe rooms when the air raid siren sounds.

“The Hezbollah fighters have (been instructed) to be completely ready to confront Israeli maneuvers on Sunday,” Nabil Qaouq told AFP

“Thousands of our fighters will not go to the polls (municipal elections scheduled for this Sunday) and will be prepared from today” for any eventuality, he added.

“In the event of any new attack on Lebanon, the Israelis will not find anywhere in Palestine to hide,” he said.

Part of the Israeli exercise addresses keeping electricity, water and other basic infrastructure functioning during a full-scale rocket bombardment on cities and towns throughout the country.

Israel estimates that Hezbollah has since 2006 stockpiled more than 40,000 rockets, some of which could reach major Israeli population centers.

In a related development the US House of Representatives on Thursday overwhelmingly backed President Barack Obama’s plans to help Israel deploy an anti-missile system.

By a 410-4 margin, lawmakers endorsed Obama’s plan to give Israel 205 million dollars for its production of a short-range rocket defense system called “Iron Dome.”