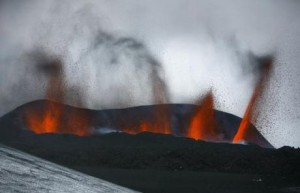 A dense cloud of volcanic ash drifting from Iceland forced the closure of airports in northern England, Scotland and Northern Ireland on Sunday.

All airports in Northern Ireland shut down at 1 p.m. (1200 GMT; 8 a.m. EDT), along with others in northern England — including Manchester and Liverpool — as well as Prestwick in Scotland, the National Air Traffic Service said.

British and Irish aviation authorities could not say when or if other airports would have to close, but they expected London’s airports — including Heathrow, Europe’s busiest — to remain open until at least 7 p.m. (1800 GMT; 2 p.m. EDT), and Shannon, in western Ireland, to be open until 11 p.m. (2200 GMT; 6 p.m. EDT).

The German Aerospace Center sent up a test flight Sunday to measure the ash concentration, and the country’s air traffic control said flights in Germany would not be affected by volcanic ash before Wednesday.

Ash can clog jet engines. The April 14 eruption at Iceland’s Eyjafjallajokul volcano forced most countries in northern Europe to shut their airspace April 15-20, grounding more than 100,000 flights and an estimated 10 million travelers worldwide and costing airlines more than $2 billion.

In southern Iceland, activity at the volcano fluctuated throughout Sunday, but had not particularly intensified, civil protection official Agust Gunnar Gylfason said. He blamed the closures on shifting winds.

“What really changes the situation is the weather pattern,” he said.

The Icelandic weather service said “presently there are no indications that the eruption is about to end.”

“No major changes are seen in the activity, the ash cloud is slightly higher than yesterday,” the agency said.

Airlines complained bitterly over the air space closures last month, calling them an overreaction. The European air safety agency last week proposed drastically narrowing the continent’s no-fly zone because of volcanic ash to 120 miles (190 kilometers) like the one used in the U.S. The proposal still must be approved.

“The closing of Manchester airspace once again is beyond a joke,” Branson said in a statement. He said test flights have “shown no evidence that airlines could not continue to fly completely safely.”

A spokesman for Britain’s Civil Aviation Authority said Branson’s remarks were “surprising” because a meeting of representatives of airline and engine manufacturers last week had agreed to find a way to ensure planes could fly safely in the volcanic ash.

British Airways, facing cabin crew strikes beginning Tuesday, said it had canceled a small number of flights out of Manchester. The airline’s chief executive, Willie Walsh, is to meet with Transport Secretary Philip Hammond on Monday.

Eurostar, which runs trains between Britain and continental Europe, said it was adding four extra trains — an additional 3,500 seats — between London and Paris on Monday.

Britain’s weather service has said it expects the winds, blowing from the northwest, to shift midweek, which it says would redirect the ash away from Britain.

Eyjafjallajokul (pronounced ay-yah-FYAH-lah-yer-kuhl) erupted in April for the first time in nearly two centuries. During its last eruption, starting in 1821, its emissions rumbled on for two years. AP