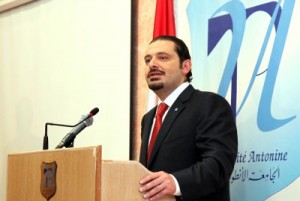 During a ceremony on Saturday marking the 14th anniversary of the Antonine university Lebanese PM Saad Hariri stressed the importance of Christian -Muslim coexistence in Lebanon.

Hariri also stressed the importance of dialogue, saying division of power means both religions have responsibilities towards each other regardless of numbers.

Hariri said  that the need to safeguard the value of coexistence goes beyond Lebanon, adding that “our success in preserving coexistence is in the interest of the Arab world and the world as a whole.”