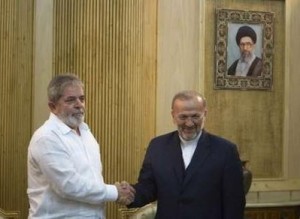 The Brazilian leader, heading a delegation of 300, was welcomed on the two-day visit by Iranian Foreign Minister Manouchehr Mottaki, an AFP journalist said.

He is due to meet Sunday morning with President Mahmoud Ahmadinejad, and is also due to meet the supreme leader, Ayatollah Ali Khamenei.

Ahead of his trip, Lula told reporters in Moscow that he was “optimistic” and hoped to be able to persuade Iranian President Mahmoud Ahmadinejad to reach an agreement with the West.

“I must now use everything I have learned over my long political career to convince my friend Ahmadinejad to come to an agreement with the international community,” Lula said.

Chances of a deal !

Iran talked up chances of a deal on a nuclear fuel swap on Saturday, the day after Russia said the likelihood of Brazil brokering a deal were 30 per cent at best.

The deal is aimed at allaying the West’s concerns over Tehran’s nuclear ambitions.

“Concerning the negotiations, I believe the conditions are conducive to reach a serious agreement over the swap deal,” Iran’s Foreign Ministry spokesman Ramin Mehmanparast told the official IRNA news agency.

The deal broke down in October after Iran insisted on doing the swap only on its territory. AFP