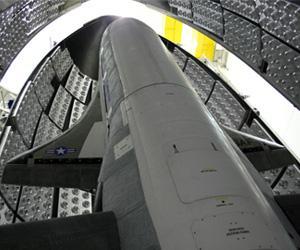 It was probably no coincidence that U.S. President Barack Obama unveiled his Nuclear Posture Review amid the confrontation with Iran, noting that it allows for first-strike use against rogue states such as the United States considers the Islamic Republic.

But some analysts say the Tehran regime sees the X-37B space plane and the Hypersonic Technology Vehicle test-launched April 22 as a more direct threat if it continues to pursue its contentious nuclear program.

Tehran viewed the tests as a threat against Iran and specifically expressed concern about “the militarization of space.”

The U.S. military has denied that these craft are the vanguard of space-based weapons systems.

But Air Force Deputy Undersecretary of Space Programs Gary Payton noted at the April 22 launch that “if these technologies on the vehicle prove to be as good as we estimate, it will … push us in the vector toward being able to react to warfighter needs more quickly.”

He didn’t elaborate but U.S. Air Force Col. Andre Lovett, deputy commander of the 45th Space Wing responsible for the Florida launch, said, “This launch helps ensure that our warfighters will be provided with the capabilities they need in the future.”

U.S. military planners are reported to have secured Obama’s support to develop a new generation of hypersonic non-nuclear weapons — capable of speeds of 3,600 miles an hour — intended to strike anywhere on Earth within a hour or so against terrorist targets or rogue states.

This is known as the Conventional Prompt Global Strike program. The prototype HTV-2, also known as the Falcon, that was launched from Vanderberg Air Force Base in California atop a decommissioned ballistic missile, falls into that category.

The Falcon, a sub-orbital vehicle capable of returning to Earth like the space shuttle, was supposed to fly 4,100 nautical miles across the Pacific in 30 minutes to land at Kwajelein Atoll.

That was to demonstrate the feasibility of lofting a vehicle to around 350,000 feet — the edge of space — and then have it home in on its target at five times the speed of sound as a precision weapon.

However, the Defense Advanced Research Projects Agency, which developed the craft, said it lost contact with the HTV-2 shortly after liftoff.

The X-37B is considered to be able to enter a polar orbit undetected and possibly snatch spy satellites, which are usually launched into that orbit.

All this, says U.S. analyst Victor Kotsev, who specializes in the Middle East, “might help explain Iran’s worries” about these projects.

“The Islamic Republic’s space program is already fairly advanced and the country has two satellites in orbit, Sinah-1 launched by Russia in 2005, and Omid, launched by a domestically built rocket in 2009,” Kotsev wrote in Asia Times Online on May 4.

“Several other satellites and space missions are in the works.”

He observed that with East-West nuclear confrontation now a thing of the past, “a joint missile defense designed to contain Third World nuclear newcomers, who as a rule are less technologically advanced and possess a more limited capacity to build rockets, might be more realistic …

“A main attraction of nukes for rogue regimes is that they are a relatively affordable option to achieve deterrence. Nowadays, obtaining nuclear weapons has become much cheaper and easier than it ever was during the Cold War …

“If a relatively poor country such as North Korea or Iran gets the bomb, it will boost its regional power status without having to keep up with massive military investments. This is precisely the assumption that a new containment policy would target.

“Enter the X-37B … The launch is yet another demonstration to the Iranians that soon their headlong quest for nuclear technology might lose a lot of its value, at least as far as possible military applications are concerned.” UPI