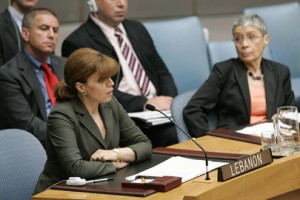 The pitfalls of Lebanon’s position as president of the United Nations Security Council were visible today, as the Lebanese representative, who presided over a periodic council debate on international terrorism, clashed with Israel’s ambassador over Hezbollah’s definition as a terrorist group.

In today’s meeting, the 15 council members as well as some non-members who have asked to join the “open debate” discussed how terrorism poses a threat to the world. Technically, the meeting was convened to review the work of several committees established by the council in the aftermath of the September 11, 2001.

“The most dangerous terrorist organizations threatening Israel’s security are Hamas in the south and Hezbollah in the north,” Israel’s ambassador here, Gabriela Shalev, said as she joined the debate, adding that it was “alarming” that several United Nations member states support and harbor such terror organizations.

Stung by a clear reference to her country, Lebanon’s deputy ambassador, Caroline Ziade, called Ms. Shalev’s remark “unfortunate.” Closing the debate, Ms. Ziade said she wanted to speak not as the council’s rotating president for the moth of May, but in her national capacity. Hezbollah, she insisted, is not a terrorist organization. It is a “legitimate party” represented in the Lebanese parliament.

“We regret that the name of Hezbollah was used in our debate,” Ms. Ziade said, adding that Ms. Shalev tried to “derail the debate from its course.” Israel, the Lebanese ambassador added, is “a neighbor that continues to aggress [against] its neighbors. This is why we should differentiate between terrorism and the legitimate right to resist against foreign occupation.”