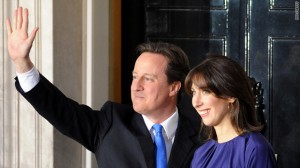 An official departure requires the prime minister to submit his resignation in person to Queen Elizabeth at Buckingham Palace, turning over the proverbial keys to the castle. The queen then takes the prime minister’s advice for his successor and determines whether to ask that individual to serve as leader of the government.

Cameron drove over to the official residence — 10 Downing Street — to announce he had accepted the invitation.

“Our country has a hung parliament where no party has an overall majority and we have some deep and pressing problems,” Cameron said.

He cited the nation’s deep debt, need for reform of the political system and social divide in his determination to form a government with the Liberal Democrats led by Nick Clegg.

“I believe that is the right way to provide the country with the strong, the stable, the good and decent government that we need so badly,” Cameron said.

Cameron’s Conservative Party finished with the greatest share of seats in last Thursday’s general election but not enough to secure the majority he needed to seize power outright. The resulting hung parliament — Britain’s first since 1974 — triggered days of political uncertainty and frantic horse-trading between the three main parties.

Brown resigned after failing to form a coalition government — between his left-of-center Labour Party and Nick Clegg’s even more left-of-center Liberal Democrats. They talks “never got off the ground,” according to a Labour Party source who spoke to Sky News, Fox News’ sister network in Britain.

After talks between Brown and Clegg fell apart, Cameron was in the position to form a government with Clegg that let Cameron take the prime minister’s spot, Clegg get a cabinet seat and a pledge for the government to work on voting reforms, a key issue for the Liberal Democrats.

Brown had been trying to form a pact to keep ruling, enabling him to claim a fourth term as the prime minister with the pledge to step down by the fall. But disagreements with Clegg led to a crumbling of good will and a scrum among Brown, senior ministers, friends and wife Sarah about what to do next. That turned out to be an announcement of his resignation.

For some waiting in the wings, enough was enough with the fumbling between Clegg and Brown.

Former Labour Party Home Secretary David Blunkett said Clegg was behaving like a “harlot” in trying to negotiate with both Cameron and Brown.

The Liberal Democrats issued a statement after Cameron’s invitation, blaming Labour for failing to create a deal on voter reforms.

“It became clear to the Liberal Democrats that certain key cabinet ministers were determined to undermine any agreement” on reform, the statement read, according to Sky News. “It’s clear some people in the Labour Party see opposition as a more attractive alternative to the challenges of creating a progressive performing government.”