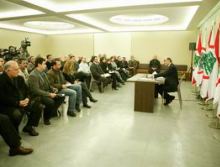 During a press conference aimed at analyzing the results of Sunday’s municipal and mukhtar elections in Beirut and Bekaa, Lebanese Forces leader Samir Geagea said on Tuesday that March 14 Christians did better than in the 2009 parliamentary election ”

“The results of the surveys were not in favor of those who wanted these surveys,” Geagea stressed.

Geagea said that in Ashrafiyeh, Saifi, Rmeil and Mdawwar, the predominantly Christian areas of Beirut, “where Aoun called for boycotting municipal election and participating only in the Mukhtar one, the difference between the two (elections) was only 4%.”

“March 14 received 54% of Ashrafiyeh votes while the FPM and its allies got 46%. We won 21 mukhtar seats in Ashrafiyeh. As to Aoun, he got 7 out of the 28 mukhtar seats although 10 mukhtars in the region were already affiliated with him.”

Commenting on the reported Sunday attack in Ashrafiyeh against supporters of the Lebanese Forces, Geagea said: “An army unit was violent against some youth who had gathered in front of an LF office in Ashrafiyeh. We have filed a complaint and we asked the Army Commander General Jean Kahwaji to take the necessary measures against the attackers.”

Commenting on Zahle elections , Geagea stressed that 47% of Christians voted in favor of March 14, “which exceeds the voter turnout of the 2009 parliamentary election.”

He said that Zahle’s “survey” showed that “the real capacity of the Aounists is around 2,000 votes.”

Geagea noted that the LF electoral machine confirmed that the voter base of MP Nicola Fattoush granted a major percentage of votes to former Minister Elias Skaff .

Answering a question on whether Skaff has regained the leadership of Zahle, Geagea played down such a hypothesis, clarifying that “Skaff’s list received 43% of Christian votes.”