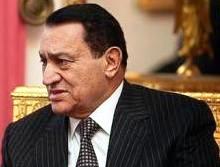 he Egyptian president has warned the opposition against stirring up “chaos” in the country, even as he welcomed recent street protests as a healthy expression of the peoples’ demands.

Mubarak says there is “no room at this critical juncture for those who fail to realize the huge difference between change and chaos.”

“I say to those who raise slogans and content themselves with posturing: This is not enough to gain the trust of the people. They must respond to the questions of the poor. What can they offer them?” he added .

Mubarak has ruled Egypt for nearly 30 years. The 81-year-old president spoke at a trade unions’ gathering on Thursday. It was his second major public speech since recovering from gallbladder surgery in Germany earlier this year.

“The upcoming elections will be free and have integrity,” he told the cheering audience.

Street protests in Cairo have been calling for greater political reforms and better pay. AP