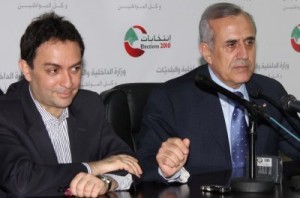 Lebanese President Michel Suleiman’s press office issued a statement on Monday that the president will redouble his efforts to amend the municipal and parliamentary electoral laws after the May municipal elections.

Suleiman also commended the Interior and Defense ministries for maintaining the order during the Mount Lebanon elections on Sunday and voiced his satisfaction that the elections are being held on time.

Suleiman who cast his vote in his hometown of Amsheet in the province of Jbeil , also vowed on Sunday to pursue the path of reform and stressed the importance of holding the municipal elections within the constitutional deadline.

The president said he cast his vote in Amsheet to confirm the need to vote. “Voting is a national obligation every citizen should fulfill and I voted to fulfill my duty not to choose a person over the other because all the candidates are important to me,” he said

Municipalities play an essential role in local development, said Suleiman, adding that their role will be enhanced after administrative decentralization is implemented throughout Lebanon.