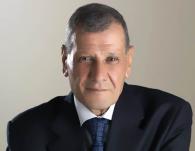 Alameddine who was born in Menyeh was the son of former Lebanese MP Mohammad Mustafa Alameddine.

Alameddine was first elected as a parliament member in 2005. He was reelected in 2009.

Alameddine was very critical of Change and Reform leader MP Michel Aoun. Back in 2008 Alameddine said in defense of criticism against north Lebanon : “This shows that Aoun is an exclusive agent, serving the Syrian regime and its leader who is incorrectly accusing the north of being an extremist region,” he said.

Alameddine also accused Aoun of working against reconciliation. He told his visitors back in 2008:

Aoun’s portrayal of Tripoli as terrorist hotbed indicated that he was not interested in national reconciliation and unity. “Does General Aoun really want unity? Or is he trying to motivate the audience for the elections?” he asked. Alameddine said that Aoun’s positions demonstrated that he was working outside the framework of reconciliation initiated by Future Movement leader Saad Hariri.