President Suleiman is back in Lebanon 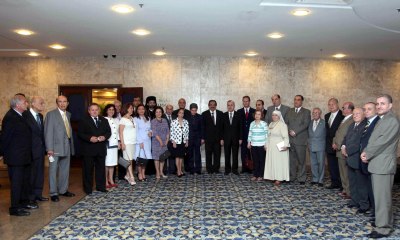 Lebanese President Michel Suleiman returned to Beirut after a five-day official visit to Brazil during which he met with his Brazilian counterpart and several key Brazilian officials. The President also met with the Lebanese expatriates in every city he visited and urged them to invest in Lebanon.

At Baabda palace Suleiman met Tuesday afternoon with U.S.Deputy National Security Adviser for Homeland Security and Counterterrorism John Brennan who was accompanied by the US ambassador to Lebanon Michele Sison

Photo: president Suleiman with a delegation from the Lebanese business community in Rio de Janeiro