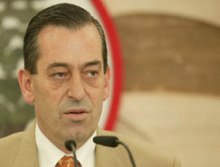 MP Antoine Zahra focused in his speech during a ceremony that marked the 5th anniversary of the withdrawal of Syrian troops from Lebanon on the Lebanese-Syrian relations. He stressed that the Baathist doctrine does not believe in the independence of Lebanon. He added that the convergence of Muslims and Christians on March 14 led to a second independence.

The ceremony which was organized by the Lebanese Forces and Phalange parties and titled “They knew what they are doing” was held at Hotel Alexander.

Zahra said there are still many unresolved files between Lebanon and Syria :

– The missing Lebanese and political prisoners in Syrian prisons

– The demarcation of the border

Zahra also “demanded the cancellation of the Syrian-Lebanese Higher Council treaty ” and said that this will signal the beginning of correct relations between the two countries.

Minister Michel Pharaon who also addressed the gathering said that the Lebanese should be united about the Syrian withdrawal just as they were united following the Israeli withdrawal.