Lebanese rally for a secular system

by yalibnan
804
"Civil marriage, not civil war" was among the banners carried by the mostly young, educated protesters
Share:

About 3,000 people marched in Beirut on Sunday to demand a secular system in place of the Muslim-Christian sectarianism that permeates politics, employment and family status matters in Lebanon.

“Civil marriage, not civil war” was among the banners carried by the mostly young, educated protesters who gathered in response to a campaign on Internet social networking sites. It was Lebanon’s first such demonstration in favor of secularism.

Many wore white T-shirts with “What’s your sect?” written on the front and “None of your business” on the back.

Lebanon, whose five million people are split into 18 sects, developed a power-sharing system enshrined in a 1943 national covenant which gave Christians a majority in parliament and said the president must be a Maronite Christian, the prime minister a Sunni Muslim and the speaker of parliament a Shi’ite Muslim.

The Taef accord that ended Lebanon’s 1975-90 civil war gave Muslims parity in parliament and also called for the abolition of sectarianism, but the system persists, with religion-based quotas observed in the bureaucracy, army and education.

“We cannot live in a country where Lebanese university teachers cannot be hired full-time unless they fit the quota of the year,” said Kinda Hassan, one of the march organizers.

“We cannot live in a country where they divide the chairs of the ministers according to their confessions, not their merits.”

Hassan, 26, operations manager for a local record label, said the constitution defined Lebanon as a democratic republic that respects freedom of belief and grants equal rights to its citizens. “So we are demanding the application of this point.”

Politicians have so far blocked attempts to reform Lebanon’s electoral system, for example by introducing proportional representation to dilute the power of sectarian-based factions.

Demands for civil marriage have run into stern resistance from Muslim and Christian religious establishments — Lebanese who marry someone from another religion must now either convert or get married abroad, with Cyprus the closest option.

“In marriage, jobs, social life, sectarianism affects just about every person in Lebanon,” said Aman Makouk, 62, a retired school teacher who decided to join the march on impulse when she saw the crowd gather on Beirut’s seafront Corniche.

“Even for the government, why should the president be a Maronite? It can be a Muslim, a Druze, anyone,” she said. “Instead of getting rid of it, people are getting more and more enclosed in this mentality, which we don’t really need at all.”

Lebanon’s system does give all communities a share of power, which is no small achievement for such a divided country in a violent and explosive region, argued Paul Salem, Middle East director of the Carnegie Endowment for International Peace. 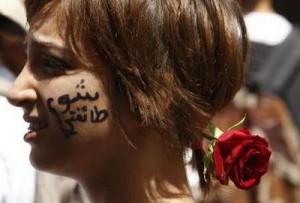 “However, the system should also allow more competition, progress and evolution,” he said, advocating electoral reform, decentralization and an end to sectarian quotas in parliament.

Salem said such reforms would be hard to push through against opposition from Lebanon’s “ruling oligarchy” who represent groups vying for power under religious labels.

“In any country where you have four or five dominant politicians, they are not going to happily share their power or change the system in a way that would weaken them.”

Fear was another obstacle to change, Salem said.

“A fearful person is comfortable with what they know. And all communities in Lebanon are fearful. Everybody’s afraid, everybody’s a victim, so it’s hard to convince them to move on.”

Police prevented the march from reaching parliament, just another frustration for those demanding change.