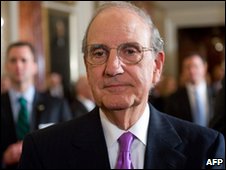 U.S. Middle East envoy George Mitchell told Israel and the Palestinians on Friday that President Barack Obama wants a comprehensive peace deal to be a reality “soon, not in some vague and distant future time.”

In a busy first day of meetings on his latest shuttle mission — amid strains between Israel and its closest ally — the Washington envoy underlined to both sides Obama’s determination to see a solution to the Middle East conflict.

He assured Israeli Prime Minister Benjamin Netanyahu that Obama is firmly committed to Israel’s security, and also wanted a peace settlement that would give the Palestinians a state.

Before going into talks in the West Bank on Friday evening with Palestinian President Mahmoud Abbas, the envoy issued a strong endorsement of Palestinian independence aspirations.

“Comprehensive peace in this region must not be just a dream,” he said. “It must be and it can be a reality. We want to make this reality happen and soon, not in some vague and distant future time.”

Mitchell said he would tell Abbas the United States shares his commitment to creating “a viable, independent Palestinian state with a contiguous territory in which the Palestinian people can exercise their right of self-determination.”

“Palestinians are entitled to their freedom and the dignity that comes with the right to determine their own future.”

Netanyahu and Obama have been sharply at odds over Israeli settlements in the occupied West Bank, land Palestinians want for their state. Abbas refuses to resume talks suspended in December 2008 until settlement stops.

Mitchell is seeking Netanyahu’s response to Obama’s request for certain confidence-building measures to persuade Abbas to enter “proximity” talks. The suggestions were handed to the Israeli leader at a low-profile meeting with Obama one month ago.

Netanyahu and Mitchell talked for about two hours. Without revealing substantive details, Netanyahu’s spokesman said: “The meeting was a good one.” Further talks would be held on Sunday.

Netanyahu is trying to bridge the split with his country’s closest ally, but without yielding ground to Obama or Abbas in a way that could destroy his pro-settler coalition government.

Israel’s elder statesman, President Shimon Peres, told Mitchell during a courtesy call by the envoy that it was “a vital interest” for the Palestinians to see a two-state solution. “The two of us need it,” he said.

Israel did not want to govern another nation, nor to “see a conflict eating up our future,” Peres added.

Mitchell has visited the region over a dozen times in the past year without managing to revive talks stalled for 16 months now over the Palestinian demand for a total settlement freeze that Israel rejects as an unacceptable precondition.

Abbas has dismissed a partial, 10-month moratorium on construction ordered by Netanyahu five months ago.

He began his visit by meeting Defense Minister Ehud Barak, leader of the center-left Labor Party, who on Monday sounded a public alarm over the state of Israel’s ties with Washington, saying the coalition “must act to change things.”

Netanyahu said on Thursday he would not freeze building in East Jerusalem, captured from Jordan in 1967 and annexed as part of Israel’s capital in a move not recognized internationally. Reuters