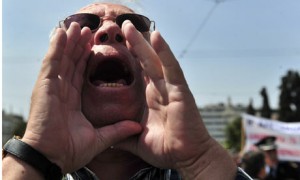 The Greek government formally requested an international funding package Friday aimed at pulling the euro-zone member out of a debt crisis.

Prime Minister George Papandreou announced on Greek television the activation of up to €45 billion, or $60 billion, in loans expected from the European Union and International Monetary Fund, Reuters reported.

The European Commission, the European Central Bank and the IMF have been holding talks in Athens to finalize the terms of the aid package. The talks are expected to be completed next week.

But even with those talks seeming to move ahead investors have been worrying about the country’s financing needs in coming months and years.

The announcement means that funding from the I.M.F. can be expedited once the board of the Washington-based fund has approved the terms. The fund is expected to provide €12 billion, according to EU officials.

Up to €30 billion in loans pledged by Greece’s euro-zone partners are still awaiting approval by legislators in some of the countries. French lawmakers, for example, will discuss France’s 21 percent contribution early next month.

It is possible that Greece could seek to expedite some of the loans before negotiations are formally complete.

There was no immediate response to a request for information from the Washington-based IMF.

Greece needs to raises around €10 billion in May to cover redemptions, coupon payments and its primary government deficit, according to investors.

On Thursday the European Union revised higher its estimate of the country’s 2009 budget deficit — meaning that austerity measures being negotiated with the I.M.F. and euro-zone countries might have to bite deeper.

Eurostat, the European Union’s statistics agency based in Luxembourg, raised its estimate of the country’s budget deficit for 2009 to 13.6 percent of gross domestic product, from the recent Greek government prediction of 12.9 percent.

Meanwhile, Moody’s Investors Service, the ratings agency, downgraded the government bond ratings of Greece to A3 from A2 and placed them on review for further possible downgrade in view of the “significant risk that debt may only stabilize at a higher and more costly level than previously estimated.”

Even with the decline in yields Friday, investors expect a higher return for holding Greek 10-year debt than equivalent bonds issued by the Philippines and India.

Photo: A taxi driver shouts slogans outside the Greek parliament. Fears over Greek debt have hammered the euro against the dollar