U.S.: The Lebanese should be in control of Lebanon 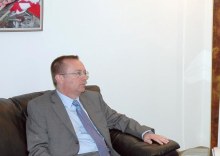 The United States said Wednesday it considered “all options” on the table if Syria is found to have supplied Scud missiles to Hezbollah, posing a major threat for Israel.

Jeffrey Feltman, the assistant secretary of state for the Middle East, said the United States would have “really, really serious concern” if Syria delivered such high-grade weapons to the Lebanese Shiite militia.

“If these reports turn out to be true, we’re going to have to review the full range of tools that are available for us in order to make Syria reverse what would be an incendiary, provocative action,” Feltman said.

“The United States has shown in the past that we are able to act,” he told a congressional hearing. “I expect that all options are going to be on the table looking at this.”

But Feltman and other State Department officials said they were still investigating the alleged Scud missile transfer. The United States on Monday summoned the most senior Syrian diplomat in Washington over the concerns.

Israeli President Shimon Peres on April 13 accused Syria of providing Scud ballistic missiles to Hezbollah, the only group that did not disarm after Lebanon’s 1975-1990 civil war.

Israel launched punishing raids on Lebanon in 2006 in response to more than 4,000 attacks by Hezbollah with rockets, which are less sophisticated than Scuds.

The allegations come just as the United States cautiously steps up dialogue with Syria.

President Barack Obama in February appointed the first US ambassador to Damascus in five years, Robert Ford, although the Senate has not yet confirmed him.

Feltman defended the Obama administration’s approach favoring diplomacy, saying that the United States needed to have regular dialogue with Syria despite concerns about its actions.

He said that many in the Arab world would not respond well to US envoys coming in for brief visits with negative messages.

With an ambassador, the United States “can go in at a very high level on a regular, continual basis,” Feltman said. “It enhances our ability to get our message across.”

But his approach faced criticism from lawmakers, particularly members of the rival Republican Party, who accused the Obama administration of rewarding Syria despite the concerns.

“I’ve talked to the Syrian ambassador here, and he seems like a nice guy and he’s got a lovely wife,” said Representative Dan Burton, a Republican from Indiana.

“But I don’t see how in the world we can take steps in that direction if this kind of crap’s going on,” he said.

He said that while the United States should seek a positive relationship with Syria, “we certainly don’t want to reward them when they’re kicking us in the teeth or spitting in our eye.”

Syria has long played a dominant role in Lebanon but withdrew its last troops in 2005 after an outcry following the assassination of pro-Western former prime minister Rafiq Hariri.

Feltman, a former US ambassador to Beirut, said he had “deeply felt feelings” for the “courageous Lebanese people.”

“The Lebanese should be in control of Lebanon,” he said. “That’s the message that we deliver to all the parties in the region but particularly Syria.” AP