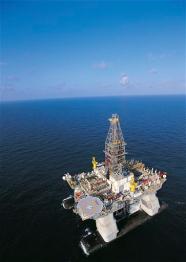 Most of the 126 people were believed to have escaped safely after the explosion on the rig Deepwater Horizon at about 10 p.m. Tuesday, Coast Guard Senior Chief Petty Officer Mike O’Berry said. The rig, about 52 miles southeast of Venice on Louisiana’s tip, was listing about 10 degrees and still burning Wednesday morning.

“It’s burning pretty good and there’s no estimate on when the fire will be put out,” O’Berry said.

Seven workers were reported critically injured, Coast Guard Lt. Sue Kerver said. Two were taken to a trauma center in Mobile, Ala., where there is a burn unit, but the nature of their injuries was unclear, she said. At least two were taken to a suburban New Orleans hospital.

O’Berry said many workers who escaped the rig were being brought to land on a workboat while authorities searched the Gulf of Mexico for any signs of lifeboats.

“We’re hoping everyone’s in a life raft,” he said.

The rig was drilling but was not in production, according to Greg Panagos, spokesman for its owner, Transocean Ltd., in Houston. The rig was under contract to BP PLC. BP spokesman Darren Beaudo said all BP personnel were safe but he didn’t know how many BP workers had been on the rig.

Kerver said the Coast Guard and the Minerals Management Service will work together to investigate possible causes of the accident.

“It’s still too early to tell the cause,” Panagos said. “Our focus right now is on taking care of the people.”

O’Berry said Coast Guard environmental teams were on standby in Morgan City, La., to assess any environmental damage once the fire was out.

According to Transocean’s website, the Deepwater Horizon is 396 feet long and 256 feet wide. The semi-submersible rig was built in 2001 by Hyundai Heavy Industries Shipyard in South Korea. The site is known as the Macondo prospect, in 5,000 feet of water.

The rig is designed to operate in water depths up to 8,000 feet and has a maximum drill depth of about 5.5 miles. It can accommodate a crew of up to 130.

A semi-submersible rig is floated to a drilling site. It has pontoons and a column that submerge when flooded with seawater. The rig doesn’t touch the sea floor, but sits low with a large portion of the structure under water. It is moored by several large anchors.

The Coast Guard said a next-of-kin hot line has been set up.