Official: Brazil is a great market for Lebanon products 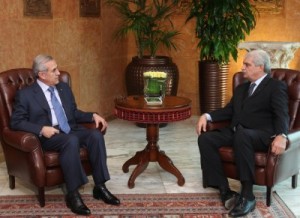 The Lebanese government hopes Brazil may be one of the foreign investors in the country. The message was transmitted to the Brazilian delegation that visited the Arab country April 16 by the minister of Economy and Trade, Mohammad Safadi.

The Lebanese authority and the minister of Development, Industry and Foreign Trade of Brazil, Miguel Jorge, who headed the delegation to the country, opened the business roundtables between Brazilian and Lebanese businessmen, at the convention space at Hotel Habtoor, in Beirut.

The minister also informed that the country has free zones where products are shipped with tax exemptions and where Brazilian companies may benefit. “Lebanon is a gateway into the Arab world,” said Safadi, recalling that his country is a good base for sales to the region.

According to Safadi, foreign trade figures between Brazil and Lebanon are very small, but have potential for growth. Last year, for example, Brazilians had revenues of US$ 310 million in trade with the Lebanese, mainly with sales of beef, live cattle, coffee and iron.

Lebanon, in turn, exported US$ 1.4 million to Brazil, mainly products like plastic fiber, plastic, marble and machinery for bakeries.

The minister stated that Brazil could buy food, medication and traditional products from Lebanon. “Brazil is a great market,” said the minister.

He recalled, however, that ties between Brazil and Lebanon go beyond trade, due to the great presence of Lebanese citizens and their descendants in Brazil.

“Our relations transcend business,” said Safadi to ANBA. Minister Miguel Jorge said to the businessmen present that there are eight million people of Lebanese origin in Brazil.brazilmag