by yalibnan
3197
Israel has delivered a secret warning to Syrian President Bashar Assad that it will return Syria to the Stone Age in response to missile attacks from Hezbollah
Share: 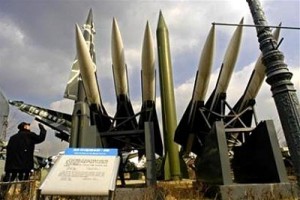 Israel has delivered a secret warning to Syrian President Bashar Assad that it will respond to missile attacks from Hezbollah, the militant Lebanese-based Islamist group, by launching immediate retaliation against Syria itself.

In a message, sent earlier this month, Israel made it clear that it now regards Hezbollah as a division of the Syrian army and that reprisals against Syria will be fast and devastating.

It follows the discovery by Israeli intelligence that Syria has recently supplied long-range ballistic missiles and advanced anti-aircraft systems to Hezbollah.

“We’ll return Syria to the Stone Age by crippling its power stations, ports, fuel storage and every bit of strategic infrastructure if Hezbollah dare to launch ballistic missiles against us,” said an Israeli minister, who who was speaking off-the-record, last week.

The warning, which was conveyed to Damascus by a third party, was sent to reinforce an earlier signal by Avigdor Lieberman, the Israeli foreign minister. “If a war breaks out the Assad dynasty will lose its power and will cease to reign in Syria,” he said earlier this year.

The Israeli decision to hold Syria directly responsible for Hezbollah’s actions is believed to be the result of intelligence assessments that Beirut has lost control of the Shi’ite organisation, which has become an increasingly powerful force in Lebanon.

Reports that Syria has supplied Hezbollah with Russian-made Scud ballistic missiles have alarmed Israeli ministers. The missiles have the potential to reach the entire country and could carry chemical warheads. New gas masks are being supplied to Israel’s entire population, with an intensive television advertising campaign underway to stress their importance.

Hezbollah, which was set up in 1982 by Iran’s Revolutionary Guard and fought a 34-day with Israel in 2006, has built-up an arsenal of 40,000 missiles and rockets, according to Ehud Barak, Israel’s defence minister.

Uzi Rubin, an Israeli missiles expert, estimated that 13,000 are aimed at Israel at any one time. “Iran is financing Hezbollah and Syria, which has opened up its military supplies to them, is being repaid by Iran,” said an Israeli intelligence source.

Over the past few months, Hezbollah leader Hassan Nasrallah has threatened Israel with reprisals, promising that any attack on Beirut’s airport would be followed by a rocket attack on Tel Aviv’s Ben Gurion airport.

The supply of Scud missiles to Hezbollah is seen as a serious threat by the Israelis. “This is the first time that an internationally known terror organisation has been equipped with ballistic missiles,” said the minister.

Washington and moderate Middle Eastern leaders, including King Abdullah of Jordan, are worried. “We are obviously increasingly concerned about the sophisticated weaponry that is allegedly being transferred,” said Robert Gibbs, the White House spokesman.

Last week Syria’s Foreign Ministry denied that there had been any transfer of Scud missiles. It claimed the allegations were aimed at giving Israel a pretext to attack Syria and avoid making concessions for peace.

But the Israelis remain defiant. “We’ll not hesitate to attack Syria if our national security is in jeopardy,” said the Israeli minister. “Assad knows that, and he’s playing with fire.” Times