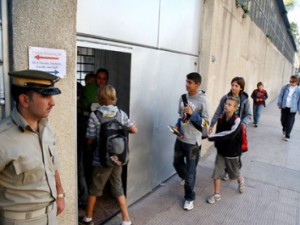 Syria has signaled that the American school in Damascus, ordered to shut down two years ago in response to a deadly U.S. raid on a village near the country’s border with Iraq, may reopen, in yet another indication both countries seem keen to take major steps toward improving strained ties.

The timing of the move is intriguing, not least because President Barack Obama’s nominee to become the first U.S. Ambassador to Syria in more than five years, Robert Ford, received majority backing Tuesday in a vote by the Senate Foreign Relations Committee.

The U.S. had not had an ambassador in Syria since the Bush administration called back its envoy following the assassination of Lebanese Prime Minister Rafik Hariri in February 2005.

Washington’s ties with Damascus have been strained by Syria’s three-decade alliance with Iran and allegations of meddling in the affairs of its eastern neighbor, Iraq.

Years of tense relations, however, started to improve after Mr. Obama took office last year and made changing America’s image in the Middle East a priority.

“The Syrian government informed the U.S. Embassy that the Damascus Community School may be re-opened,” a U.S. Embassy official said on Saturday. “The Embassy welcomes this announcement, and is studying the feasibility of re-opening the school in calendar year 2010,” the source told CBS News on condition of anonymity.

In 2008 there were approximately 450 students registered at DCS, which charged an annual tuition fee of $16,000.

Though Syria has long been viewed by the U.S. as a destabilizing country in the Middle East, the strike into Syria by American helicopter-borne commandos in October 2008 was by far the boldest since the U.S. invasion of Iraq and condemnations of Syria’s role in stoking the Iraqi insurgency.

Describing the strike as a “barbaric crime” and the climax of “state terrorism.” Damascus said eight civilians died when the settlement of Abu Kamal came under attack, and immediately decided to close the American school and a U.S. culture center.

Washington said the target was a network that smuggled fighters and weapons into Iraq, but never gave a proof as the Syrians requested.

Both the school and cultural center, located in Damascus’ central upscale Maliki neighborhood, are among the oldest Western institutions in the Middle East. The Damascus Community was established in 1958, while the American Cultural Center has operated since the 1950s, offering educational services and free film showings, lectures and books.

“As part of America’s foreign policy in the Arab world, DCS was for many years a success, helping to promote America as a land of opportunity, freedom and dignity to hundreds of Syrians. It marketed the American dream, and its graduates went on to American universities in the U.S., who returned home to promote America,” says Dr. Sami Moubayed, a Syrian political analyst.

Amal Saad, a 42-year-old Syrian housewife who had to move her children to the Pakistani school after the closure of the American school, said she cannot wait until DCS reopens.

“I hope they will open it right now. I am ready to move my kids right away. I am sure my kids will be thrilled to hear the news,” she said. CBS