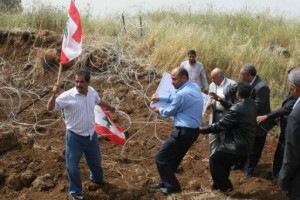 Lebanese residents dismantled a barbed wire fence set up by Israeli troops in a disputed border area on Friday, leading to a call for restraint by UN peacekeepers in the tense region.

“The residents have taken down the barbed wire near the village of Aabasiya, which Lebanon considers part of its territory,” a Lebanese military spokesman told AFP on condition of anonymity.

Israeli troops set up the fence on Tuesday near the Blue Line, a UN-drawn border with Lebanon, in what the Lebanese army claims was a violation of Lebanese territory.

Around 20 Lebanese, led by  MP Qassem Hashem, marched into Aabasiya near the disputed area of Ghajar at the Lebanese border with Syria and Israel and tore down the barrier before leaving the area.

Two Israeli tanks and dozens of soldiers immediately arrived at the border as Lebanese troops went on alert across the Blue Line, which was established after the withdrawal of Israeli troops from southern Lebanon in 2000 following a 22-year presence.

The UN peacekeeping force in southern Lebanon — UNIFIL — said however that the Lebanese demonstrators had crossed the UN-drawn border.

The demonstrators “crossed the Blue Line and… removed sign posts of a minefield as well as concertina wire which was laid by the Israeli Defence Forces three days ago, and placed two Lebanese flags next to the Israeli technical fence,” UNIFIL deputy spokesman Andrea Tenenti told AFP.

“UNIFIL has contacted the parties in order to prevent any escalation of the situation, urging restraint and calling on them to take the necessary steps in accordance with their obligations under UN Security Council 1701,” he added.

UN Security Council Resolution 1701 brought an end to a deadly 34-day summer war in 2006 between Israel and the Shiite militant group Hezbollah and beefed up the UNIFIL force in southern Lebanon.

Lebanon on Tuesday filed a complaint to the Security Council accusing Israeli troops of crossing into its territory at the weekend near the Wazzani river, close to Aabasiya.

The Lebanese army on Sunday said 11 Israeli soldiers had crossed into Lebanese territory and dismantled a bulldozer at a construction site near the Wazzani.

UNIFIL said it only had evidence of Israeli troops crossing the technical fence but not the Blue Line.

Residents of southern Lebanon continue to voice fears another conflict may be brewing amid a constant war of words between Hezbollah and Israel.