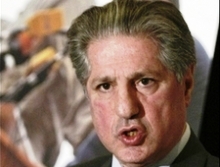 He also said : “Arms not under the state’s control is unacceptable”.

Gemayel touched on the criticisms against the Internal Security Forces (ISF) for signing the 2007 US-ISF cooperation agreement, saying, “There are political reasons behind attacking the institution, which could be aimed at weakening the country’s security forces.” Hezbollah spearheaded the criticism and is being supported by its Syrian backed allies.