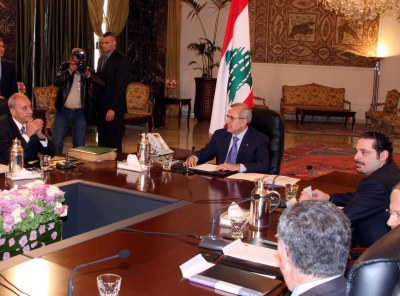 Lebanese President Michel Suleiman adjourned on Thursday the national dialogue till June 3 against a backdrop of changes in the stances of MPs Michel Aoun and Walid Jumblatt.

Aoun reportedly threatened to withdraw from dialogue if information on discussions about the party’s arms was leaked to the press and Jumblatt reportedly called for the removal of the weapons from the dialogue agenda.

Lebanese Forces leader Samir Geagea made comments to reporters before the meeting. When asked about Aoun’s threats to withdraw from the dialogue, Geagea said: “This is an invitation to talk more and more about the issue of arms.”

Minister Mohammed Safadi also said that during the next session, he would present his vision on building the capabilities of the army “so that the army and resistance could be together.”

Although March 14 members haven’t engaged in verbal attacks with the three parties over their stances, involved sources stressed to An Nahar daily that Hezbollah’s weapons are a controversial issue and they were the reason behind the invitation for all-party talks at Baabda.

Sources close to the March 14 alliance told As Safir :

“Attempts to separate between the issue of arms and the defense strategy will not succeed.”

The presidential palace’s sources told An Nahar on Thursday that Suleiman will not make an opening speech. He will welcome conferees and call for the continuation of dialogue from where it ended last time.

An Nahar’s sources said that both Aoun and Jumblatt would explain to dialogue participants their recent stances.

Following the talks the following comments were made:

Lebanese Forces leader Samir Geagea said: “We discussed all topics, even the arms of the Palestinians and Hezbollah, and the government must put a mechanism for solving the issue of Palestinian arms.”

FPM leader MP Michel Aoun : Everything was fine and we’ve agreed not to leak anything to the media.

Speaker Nabih Berri said that the meeting was excellent

Former PM and MP Najib Mikati said that the deliberations were better than those of the March session.

MP Michel Pharaon described the dialogue as very serious, adding that the committee members discussed all the issues in detail.

President Michel Suleiman’s office issued a statement on Thursday . According to the statement, the national dialogue committee agreed to the following six points :

1) Continue to present studies on the national defense strategy.

2) Continue appointing representatives to the committee of experts to find common ground between the different proposals.

3) Continue the discussion of the national defense strategy to protect and defend Lebanon.

4) Limit the discussion of the national defense strategy to the national dialogue committee and commit to political and media calm.

5) Reiterate the commitment to the decisions reached in the 2006 National Dialogue and work to implement them, particularly those pertaining to the arms of Palestinian factions outside the refugee camps.

The statement also said that Suleiman kicked off the session by reiterating the importance of dialogue and called for preserving the national dialogue committee.

He also discussed Israeli practices in Palestine as well as the extent of Tel Aviv’s breaches and threats to Lebanese sovereignty, particularly the recent incidents in the Wazzani and Abassiyeh.