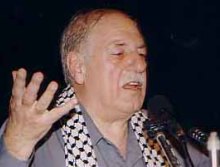 The daily As-Liwa has reported on Friday that Syria has informed the Lebanese authorities of its willingness to assist in dealing with the Palestinian camps issue if the Lebanese government officially asked for help.

This offer comes following clashes between various members of the Syrian-backed Popular Front for the Liberation of Palestine-General Command PFLP-GC headed by Ahmed Jibril in east Lebanon .

According to preliminary information, the clashes with automatic weapons and rocket-propelled grenades between the PFLP-GC military base in Qusaya and Ain al-Bayda base near Kfar Zabad were the result of an “internal disagreement,” according to an army source.

One person was injured in the fighting which started before midday Thursday.

The Lebanese army fought a 106 day battle in 2007 against Fatah al Islam Palestinian militants , another Syrian backed group. hundreds died in that battle and the Nahr al Bared camp where the battle took place was completely destroyed. Fatah al Islam’s leader Shaker Absi , who fled to Syria after he was defeated by the Lebanese army served as an officer in the Syrian army.