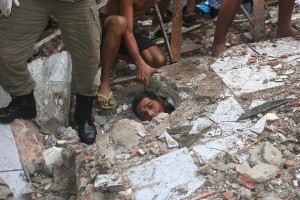 The death toll in the storm which caused severe damage to Rio’s metro area on Monday and Tuesday reached 138, according to the latest Civil Defense report, released on Wednesday evening.

Forty-six people died in Rio, 72 in neighboring Niteroi, 16 in Sao Goncalo, and one each in the towns of Engenheiro Paulo de Frontin, Mage, Nilopolis, and Petropolis.

The death toll surpasses the one registered in a major flood occurred in Brazil’s Santa Catarina state, in the southern region, in late 2008. However, the Santa Catarina storms lasted a month.

Since dozens of people remain missing in several municipalities, the death toll is expected to rise even more. About 130 people were injured in the floods and mudslides.

Over 14,000 people in 12 municipalities had to leave their homes. Out of those, 3,200 had nowhere to go and were taken to improvised shelters in schools, churches and sports centers.

Brazil’s Health Ministry announced on Wednesday evening that it will send five tons of medicine to the storm victims. The delivery of 50 new ambulances to the public ambulance service (SAMU) will also be anticipated to Thursday.

Earlier in the day, the city hall announced an investment of 100 million reais (56.5 million U.S. dollars) in drainage and hill stabilization projects in order to prevent other tragedies such as the one occurred this week.

The city also requested 270 million reais (152.5 million U.S. dollars) from the federal government to make a major drainage project in the Bandeira Square, an area of the city which floods almost every time it rains. Xinhua