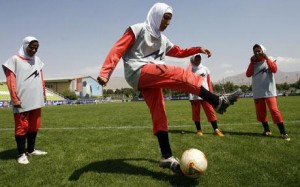 The Iranian girls’ soccer team have been kicked out of this year’s first Youth Olympics because of a FIFA ban on playing in Islamic head scarves.

Iran’s National Olympic Committee (NOC) had refused to let the team play at the August 14-26 Games in Singapore without the hijab and they have been replaced by Thailand, according to the Asian Football Confederation website (www.the-afc.com).

“The FIFA Executive Committee had no choice but to take the decision that Iran will not be able to participate in the inaugural Youth Olympic Football Tournaments,” the AFC quoted a letter from FIFA’s general secretary to the Iran Football Federation as saying. Soccer’s tournaments at the Olympics are organized by the world governing body, whose rules allow only the wearing of a shirt or jersey, shorts, socks and footwear to play the game.

Some 3,500 athletes aged between 14 and 18 are expected to take part in 26 sports at the inaugural Youth Olympics. Washington Post