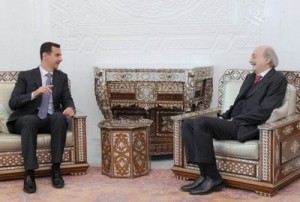 Jumblatt, who was considered a strong critic of Syria and has accused it openly for the 2005 assassination of Lebanese former premier Rafik Hariri, said recently he wants to “open a new chapter” with Damascus.

Lebanese media quoted Jumblatt as praising Assad’s policies “and his keenness towards Lebanon’s security and stability.”

Jumblatt is accompanied by his son Taymour and Transport and Public Works minister Ghazi Aridi on his visit to the Syrian capital.

Damascus has always denied involvement in the bomb blast in Beirut that killed Hariri on February 14, 2005.

The secretary general of Lebanon’s Hezbollah movement, Sheikh Hassan Nasrallah, was scheduled to speak later Wednesday on the Hariri assassination, which is being investigated by UN special tribunal.

Media reports in the past few weeks said Hezbollah members were questioned by the UN team in Beirut in connection with the Hariri murder.

On May 23, 2009, the German magazine Der Spiegel claimed the tribunal had evidence that Hezbollah “planned and executed” the assassination. DPA