60 minutes: The haunting of Nada Prouty

by yalibnan
1308
Nada Nadim Prouty has been completely exonerated by the CIA, but Federal prosecutors and conservative writers are unrelenting.
Share: 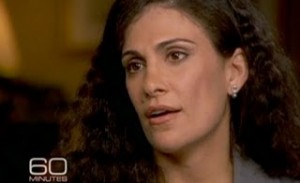 Nada Nadim Prouty has been completely exonerated by the CIA, but no matter: Federal prosecutors and conservative writers who convicted her as a Hezbollah spy in print, if not in court, three years ago, are unrelenting.

60 Minutes ran a sympathetic piece Sunday night on Prouty, a native of Lebanon who came to the United States in 1989 to escape the vicious civil war and a father who savagely beat her. In what 60 Minutes’ Scott Pelley called “a fateful shortcut to citizenship,” she engaged in a sham marriage in order to stay here.

Lovely, talented and fearless, Prouty followed the script of the American Dream through college and into the FBI, where she fought the terrorists who had helped tear Lebanon apart. There, and later at the CIA, she won accolades for her daring, relentless work.

But then her “fatal mistake” caught up to her. Investigators discovered not only that she was a very illegal alien, but that she had accessed FBI computers in search of information on a distant relative suspected of ties to Hezbollah, the Iran-backed Lebanese militia (and political party) that has been named a terrorist organization by the United States.

Spurred on by zealous prosecutors, her arrest spawned stories about the Hezbollah spy who had wormed her way into the bowls of the FBI and CIA. The New York Post called her “Jihad Jane.”

In a November 2007 press release, prosecutors said, “it’s hard to imagine a greater threat” than someone like Nada Prouty. The U.S. Attorney’s office in Detroit, where Prouty grew up, boasted it had unmasked “the only known case of an illegal alien infiltrating U.S. intelligence agencies with potential espionage implications.”

Last night, 60 Minutes, relying on the same court documents available to the Justice Department and interviews with former intelligence officials, thoroughly debunked those allegations. And in fact, Prouty, married for the past decade to an American diplomat, was never charged with espionage of any sort.

Indeed, the CIA specifically cleared her in a letter to the court:

“This letter is to inform you that the CIA conducted a debriefing of Nada Prouty, which began on 28 January 2008,” wrote the CIA’s Office of Security – a very tough bunch of professional skeptics. “It included a polygraph interview.”

“Ms. Prouty was fully cooperative during those processes,” the CIA explained. “The agency did not identify any information that Ms. Prouty cooperated or engaged in unauthorized contact with a foreign intelligence service or terrorist organization.”

Again Monday, the CIA issued an emphatic statement of support for Prouty, who lost her citizenship in the case and cannot work for a government very much in need of her talents.

“Her strong service with the CIA—including in places of real danger—is a matter of public record,” CIA spokesman Paul Gimigliano said to me in an e-mail.

Despite this, a recalcitrant, unconscionable Justice Department is not only standing by its original sensational accusations, it sneered at the effort “60 Minutes” made to balance the picture.

“It appears that Prouty today seeks to cast herself as a victim of the U.S. government and the subject of an overzealous prosecution,” the department said in a statement released to the Detroit Free Press. “The only victim in this case was the U.S. government, which was repeatedly defrauded by Prouty and risked compromise because of her illegal acts.”

And again, the conservative writers who took the Justice Department’s lead back then are at it again, calling the 60 Minutes piece “a whitewash,” and worse.

“You know what’s truly disgusting?,” fumed right-wing blogger Debbie Schlussel, in a piece that sailed around the blogosphere.

I’d like to think that If such critics spent an hour or so reading through the record of Prouty’s service to her illegally adopted country, backed by the accolades of her former colleagues in counterterrorism, they might relent.

Indeed, the portrait drawn by the court documents makes Prouty sound like a character in The Bourne Identity, pursuing real-live terrorists in dangerous missions around the world. Unlike Jack Bauer, and Prouty’s critics, she’s the real deal — or was. Now she’s sidelined in the Virginia suburbs.

Here are some of the testimonials to her that didn’t make it into the 60 Minutes piece.

Based in the FBI’s Washington Field Office, Prouty “proved her dedication to fighting terrorism on all fronts by traveling to all [corners] of the world in hopes of bringing terrorists to justice and comfort to the families who lost loved ones at the hands of the terrorists she fought,” Chervenak said.

“Nada volunteered readily for assignments in dangerous locations; places other agents did not want to go. Given her Arabic language skills and cultural knowledge, Nada frequently, and willingly, helped the agents on her squad as well as other agents assigned to the WFO,” Chervenak said.

There were a dozen accolades like that in the sentencing memorandum (PDF), some of them stunning.

* CIA veteran Joseph Pettinelli called her “one of the finest young officers with whom I had the pleasure of working in recent years.”

* Investigating the USS Cole bombing, Prouty defused a tense standoff between Yemeni guards and Marines, who “had guns pointed at each other, unable to communicate due to the language divide.”

* “Never have I been so impressed by an officer, male or female,” a still-covert CIA officer attested.

* “She contributed significantly to the overseas arrest of an international terrorist,” another agent stipulated.

* After the Sept. 11, 2001 attacks, she spent two months in Pakistan chasing terrorists.

* In Jordan in October 2002, she pursued the assassins of USAID diplomat Lawrence Foley, establishing “that Abu Musab al-Zarkawi, the infamous leader of al-Qaeda in Iraq, was behind the slaying.” The top FBI agent there praised her work.

That would be more than enough for a stellar counterterrism career. But in July 2002, she flew into Africa on the trail of the kidnappers of U.S. citizen Brent Swan.

“Ms Prouty traveled repeatedly to the Congo where she arrested the suspect in the kidnapping and returned him to the United States to face justice,” the sentencing memorandum says.

In 2003, she continued to work overseas, even after the government had inadvertently revealed her name and identity in the trial of the Sept. 11 conspirator Zacarias Moussaoui, the document says.

Later, she worked under mortar fire in Iraq — while six months pregnant, wearing a flak vest specially designed to protect her unborn baby.

And even after she was indicted, she continued to work against Hezbollah, the sentencing memorandum says.

None of this was contested by the Department of Justice.

Yet prosecutors still “makes no apologies for the prosecution of Nada Prouty,” the Justice Department wrote in a statement to 60 Minutes. “She has no one to blame but herself.”

“The actions taken by the government to address her crimes were measured, appropriate and consistent with obligations to uphold the law without fear or favor,” the department maintained in the statement.

But what about its original hysteria? Do the prosecutors still believe “it’s hard to imagine a greater threat” than Prouty?

They’re silent on that.

Justice should do the right thing, and follow the lead of the CI Centre, an organization of senior former FBI and CIA officers headed by David G. Major, a 24-year bureau veteran and former head of counterintelligence – that’s the people who are in the business of catching spies — and pull in its horns.

If anyone should keep pointing a finger at Prouty, it’s Major, President Ronald Reagan’s White House director of counterintelligence, intelligence and security programs.

But on Monday, prodded by Prouty’s lawyer Mark S. Zaid, Major deleted a piece from the CI Centre’s Web site that characterized Prouty as a Hezbollah spy. Zaid said he’s hopeful Fox News and other Web sites will do the same.

Prouty is as sorry as sorry can be, having lost her citizenship, her security clearances and the chance to keep battling terrorists in the world’s nastiest back alleys.

“They take away from me the most precious thing, the thing that I believe in the most,” she told 60 Minutes, weeping. “I feel like I’ve been stabbed in the heart.”