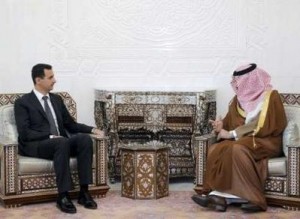 Syrian Arab News Agency (SANA) reported that Syrian President Bashar al-Assad met with Saudi Foreign Minister Saud al-Faisal in Damascus on Monday, during which they agreed that it is important for the Arab League Summit—which will be held in the last week of March in Libya—to issue decisions that enhance joint Arab work and solidarity.

According to SANA, the leaders discussed recent developments in the Palestinian territories. Clashes in recent weeks in Jerusalem have left four Palestinians dead, following Israeli announcements earlier in March that it would expand settlements in East Jerusalem and rebuild the Hurva Synagogue.

Assad agreed with Faisal on the “necessity of coordination between the Arab countries to expose the Israeli practices, which prove Tel Aviv’s unwillingness to reach peace,” the agency added.

SANA said that both leaders also discussed the progress of Saudi-Syrian bilateral relations.