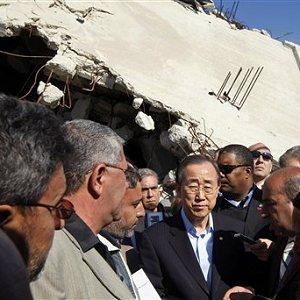 U.N. Secretary General Ban Ki-moon has made a visit to the Gaza Strip and repeated his condemnation of the blockade imposed by Israel and Egypt. Meanwhile, international efforts to get Israelis and Palestinians back to negotiations are stepping up.

U.N. Secretary General Ban Ki-moon came the region to press Israelis and Palestinians to return to negotiations. On Sunday, while visiting the Gaza Strip, he condemned Israel for the blockade it and Egypt have on the enclave.

“I have repeatedly made it quite clear to Israel’s leaders that the Israeli policy of closure is not sustainable and that it is wrong,” Mr. Bn said. “It poses unacceptable suffering of human beings. This policy is also counterproductive. It undercuts moderates and empowers extremists.”

Israel has imposed a blockade since the 2007 violent takeover of the Strip by the militant group Hamas. Israeli officials say their restrictions on cement and other construction materials are meant to prevent Hamas from building bunkers to attack Israel.

As a result of the blockade, residents have been unable to rebuild the thousands of homes that were destroyed during Israel’s war on militants in 2008 and 2009.

While in the region, Ban has criticized Israel’s construction of settlements on lands it occupies in the West Bank and East Jerusalem.

On Sunday, he appealed for Israel and the Palestinians to agree on a prisoner exchange that would result the in the release of Palestinian prisoners and the liberation by Hamas of kidnapped Israeli soldier Gilad Shalit.

Speaking at a Cabinet meeting, Israeli Prime Minister Benjamin Netanyahu said his government will not restrict building in East Jerusalem. The move puts Mr. Netanyahu further at odds with the United States, just before he is due to leave for a visit to Washington this week.

The prime minister said that from Israel’s point of view, building in Jerusalem is like building in Tel Aviv. He said he has made this clear to the U.S. administration. Mr. Netanyahu said that in upcoming indirect talks with the Palestinians, each side can present its position. He said he will make Israel’s position clear during his visit to the American capital.

Israel has not complied with U.S. calls for it to cancel the approval of 1,600 new housing units in a Jewish settlement of East Jerusalem, which the Palestinians claim as the capital of their future state.

The Palestinians have said they will not return to talks until Israel stops all settlement activity.

Special U.S. envoy George Mitchell is returning the region to push along efforts for both sides to start indirect negotiations.