A politically charged uproar has erupted on the campus of a leafy university over the academic collaboration between a local Arab professor and two Israeli counterparts.

In a town hall at the American University of Beirut earlier this month, nearly 300 in the crowd castigated Sari Hanafi, a scholar and Palestinian activist, for his role as co-editor of the book, “The Power of Inclusive Exclusion: Anatomy of Israeli Rule in the Occupied Palestinian Territories.” 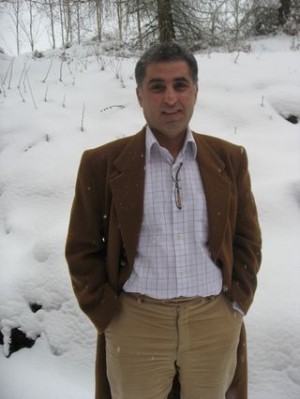 Hanafi ( pictured right) worked on the book with two Israeli scholars from Tel Aviv University, Adi Ophir and Michal Givoni, both of whom publicly oppose the Israeli military presence in the West Bank.

Lebanese law forbids contact between its nationals and Israel. The two countries remain technically at war. There’s also an ongoing effort to isolate Israel called the Palestinian Academic Campaign for the Academic and Cultural Boycott of Israel, which many AUB students and faculty support.

“This open collaboration between an Israeli academic and an AUB academic is unprecedented in my 50 years of service at this university,” said Tarif Khalidi, professor of Arab and Middle Eastern studies at AUB, who addressed the audience at the March 8 meeting. “I say ‘open’ because God knows what might be happening under the table. This is especially disturbing in a country like Lebanon, which is still in a state of war with Israel.”

Some have called the drive against Hanafi a McCarthy-like effort to punish a professor who defied the current Arab world orthodoxy by partnering with the enemy.

Hanafi apologized to students and faculty at the town hall but also strenuously defended himself before the hundreds assembled. “We are committed to a common cause which should open up the space we need for a vigorous yet respectful conversation on the issue of academic boycott and the publication of my recent book,” said the 47-year-old social scientist.

He said said scholars need to “distinguish between Jewish, Israeli and Zionist” as well as between individual scholars and institutions in adhering to the boycott.

“As a political sociologist working on issues of Israeli technologies of power, I will continue to find myself writing and working in ‘gray areas,’ ” he said. But he also promised that he would henceforth “be very careful to take into account” local sensitivities in pursuing his work.

Some weren’t buying it. “The current Israeli government is arguably the most vicious in the history of that state,” Khalidi said. “Any act of cooperation or collaboration is seen in Israel as a blow to the international boycott. I cannot think of any instance in which collaboration with Israeli scholars, on any level, can serve the cause of Palestine, Lebanon or the Arab world.”

The issue has roiled the campus. Ahmad Dallal, provost at AUB, issued a letter urging calm but reminded scholars they must adhere to Lebanon’s rules.

“I take this opportunity to remind all members of our community that, as an institution of higher learning with an historic presence in Lebanon and the Middle East, AUB is deeply committed to upholding the essential values of academic freedom, and will do so within the bounds of Lebanese law, which strictly prohibits collaboration with Israeli institutions,” he wrote.

Hanafi interrupted his speaking tour at Cambridge University and University of Exeter, where he had been presenting his book in honor of International Apartheid Week, to return to Beirut for what another AUB professor privately described as “a witch hunt.”

The fight has pitted student against student. An AUB Anti-Normalization Petition garnered 330 signatures by students and sympathizers against any ties with the state of Israel. Others launched In Solidarity with Prof. Sari Hanafi-No to the Arabo/McCarthyism, a Facebook page, as a counter-effort.

In Hanafi’s book, the editors insist that their scholarship is “essential for forming effective resistance to the occupation and for coming to terms with the real prospects of bringing it to an end.”

Though Israel and Lebanon continue to technically be in a state of war, even some Arab activists have urged cooperation between Arabs and Israelis sympathetic to their cause. In 2001, the Palestinian NGO Network announced that Palestinian activists and academics could cooperate with like-minded Israelis. The Van Leer Jerusalem Institute organized workshops which Palestinians and Israelis attended. It also granted a fellowship to Ophir and some of his Ph.D. students who contributed to the book.

But in 2004, the boycott-Israel drive was inaugurated, with Hanafi as one of its earliest endorsers. It urges scholars from the international community “to comprehensively and consistently boycott all Israeli academic and cultural institutions until Israel withdraws from all the lands occupied in 1967, including East Jerusalem,” according to its website.

Hanafi, Ophir and Givoni decided to begin work on their book in 2005.

Scholars from Cambridge and Exeter Universities have come to Hanafi’s support. “The book could not, and must not, be seen as a violation of [the boycott],” a statement said. “We strongly sense that a normative and literal application of the rules may sometimes produce paradoxical outcomes, as the campaign and petition against Hanafi demonstrates.” LAT