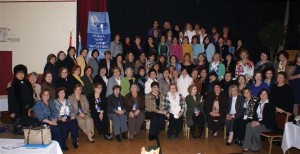 The three-day celebration, organized by the ARS Central Executive Board, began with a gala evening at Carnegie Weill Recital Hall. The evening’s keynote speaker, Mary Ellen Iskenderian, President and CEO of Women’s World Banking, praised the ARS for its philanthropic and charitable work. She touched upon the changes in the non-profit sector, mentioning that investment in women’s economic development has shown to be successful. She urged the gathering to continue promoting educational, healthcare, housing and welfare issues for Armenian families throughout the world.

The evening began with Mistress of Ceremonies Stephanie Mesropian reflecting upon the 100 years of ARS service to the Armenian communities. Mesropian described the humanitarian work of the ARS as it evolves during the past century. She also touched upon the organization’s future with special focus on the programs in Armenia, Artsakh and Javakhk. The master of ceremonies introduced invited guests, including benefactors, organizational representative, church leaders, and U.N. representatives (see below for a full list of officials who attended the ARS Centennial Gathering).

Eastern Prelate Archbishop Oshagan Choloyan was invited to read the Pontifical Encyclical of His Holiness Aram I Catholicos of the Great House of Cilicia, who declared 2010 the Year of the Armenian Woman, congratulating the ARS on its 100 years of selfless service to the Armenian nation.

Armenia’s Ambassador to the US, Tatoul Markarian, delivered a message from Armenia’s Minister of Diaspora, Hranoush Hakobyan. The Ambassador also offered his personal congratulations and urged the members to continue its mission.

Vicky Marashlian, Chairperson of the ARS Central Executive Board, reminded everyone of the work that the ARS has undertaken. “The ARS works on a full spectrum of issues; from local community efforts, to sheltering and feeding orphans in the Homeland, to promoting an awareness of our vibrant culture, and of equal justice wherever and whenever people are denied basic rights,” she stated. Marshlian speaking to the membership in the audience emphasized that “we are an alliance of strong, passionate women catalyzing partnerships and leveraging human and financial capital to serve the needs of our people.”

At the conclusion of her address, Marashlian presented the ARS “Ararat” Award to the Near East Foundation, an organization who is celebrating it’s 95th anniversary and was started the same year as the tragic Armenian genocide in 1915. Shant Mardirosian, Chairman of the Near East foundation, accepted the award with great honor and thanked the ARS for acknowledging the work their organization does.

The evening featured a vibrant performance by opera singers Yeghishe Manucharyan, tenor and Victoria Avetisyan, mezzo-soprano. They were accompanied on piano by Armine Vardanyan; and Alisa Nakashian-Holsberg on the glass harmonica.

The celebration concluded with a reception which gave all those in attendance an opportunity to collectively congratulate the ARS’ 100 years of service to the Armenian people.

In addition to the Wednesday night celebration, the members who had gathered from throughout the world attended a one-day seminar on various topics, including UN NGOs; Armenian women and empowerment; international philanthropy and internal organizational issues.

The 100th anniversary is also being celebrated with local and regional events throughout the 26 countries where ARS entities are located.

The New York-based gathering is part of a series of events that will culminate this fall with a pilgrimage to Der Zor, the Syrian desert where hundreds of thousands of Armenians perished during the Genocide and a week-long celebration in Armenia.

List of officials who attended the ARS Centennial Gathering:

Archbishop Oshagan Choloyan, Prelate of the Armenian Apostolic Church in the Eastern USA

Archbishop Moushegh Mardirossian, Prelate of the Armenian Apostolic Church in the Western USA

Tatoul Markarian, Ambassador of the Republic of Armenia in the USA

Mr. & Mrs. Garen Nazarian, Representative of the Republic of Armenia at the UN

Aram Avetisyan representing the NKR Representation in the USA