Lebanon Speaker urges UN to stop its bias towards Israel 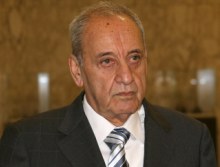 Lebanon’s Speaker Nabih Berri on Friday urged the United Nations Security Council, especially the permanent member states, to “stop treating Israel as an exception to international law, and hence, implementing UNSCR 1701 and halting threats of resorting to force against Lebanon.”

On the occasion of the 32nd anniversary of establishing the United Nations Interim Force in Lebanon (UNIFIL), Berri in a statement stressed “Lebanon’s keenness and commitment to implementing the obligations of UNSCRs 425 and 1701.”

Berri noted “the persistence of Israel in obstructing the implementation of these two resolutions through continuing to occupy Shebaa Farms, Kfar Shouba Hills and the Lebanese part of the Ghajar village in addition to the countless violations of the Lebanese territorial borders, airspace and regional waters.”