Helu vowed to contribute to several projects in Lebanon 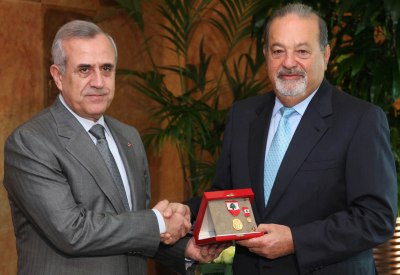 Lebanese president , Michel Suleiman said during his meeting with Carlos Slim Helu and his accompanying delegation that he wants to strengthen relations with Lebanese expatriates especially those business leaders who care about their homeland and want to invest in the future of the country . Helu, the Lebanese – Mexican businessman who was declared by Forbes magazine on Wednesday as the world’s richest man thanked the president for receiving him , expressed his pleasure at being in Lebanon for the second time since 1964 and vowed to contribute to a number of projects in various fields.”