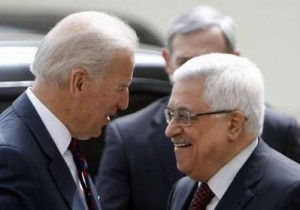 “It is incumbent on both parties to build an atmosphere of support for negotiations and not to complicate them,” Biden said in a media statement alongside Palestinian President Mahmoud Abbas in the West Bank city of Ramallah.

“Yesterday the decision by the Israeli government to advance planning for new housing units in East Jerusalem undermines that very trust, the trust that we need right now in order to begin … profitable negotiations,” Biden said.

In Jerusalem, an Israeli cabinet minister apologized for what he termed “real embarrassment” caused to Biden by the news Tuesday that Israel would erect 1,600 settler homes in an area of the occupied West Bank it annexed to the holy city.

Israel’s announcement of the project changed the tone of a visit in which Biden had focused on reassuring Israelis that President Barack Obama was committed to their security in the face of a possible Iranian nuclear threat.

Aides to Israeli Prime Minister Benjamin Netanyahu said he had been blindsided by the announcement of the plan by the Interior Ministry, run by Shas, an ultraorthodox, nationalist party that is a key member of his governing coalition.

Abbas, who agreed to indirect talks with Israel after he had made a settlement freeze a condition for resuming peace negotiations, urged Israeli leaders to cancel the decision.

But the Western-backed Palestinian leader gave no indication the so-called “proximity talks” would not proceed. No date, venue or agenda has been set.

“The American administration must put pressure on Israel so the indirect talks are not obstructed,” said Nabil Abu Rdainah, an Abbas aide.

Biden made no reference to any possible postponement. He spoke of “indirect talks being launched” — giving no date — and said they should lead to direct negotiations.

He said the United States would hold both sides accountable for any statements or actions “that inflame tensions or prejudice the outcome of talks, as this decision did” — a reference to the settlement plan.”

Biden’s public comments followed a written statement of condemnation that he issued Tuesday. The Arab League in Cairo, which last week endorsed a four-month framework for the talks, called an urgent meeting of a committee overseeing the process, for later Wednesday.

In November, Netanyahu ordered a 10-month halt to new housing starts in West Bank settlements but exempted those Israel considers part of Jerusalem and projects for Jewish homes in the eastern sector of the city captured in 1967.

Palestinians say settlements will deny them a viable state, which they hope to establish in the West Bank and Gaza Strip.

“Messages have been sent to Biden and the Americans that there was no intention to undermine him,” a senior Israeli official said. “We were genuinely surprised, just as surprised as the Americans.”

Netanyahu took no steps to reverse the decision to build in Ramat Shlomo, a religious Jewish settlement. Israel considers all of Jerusalem its capital. Palestinians want East Jerusalem as the capital of a future state.

Shas’s promotion of the plan was an indication to the Obama administration of the problems Netanyahu would face within his government should he make bold moves, as Washington has demanded, toward a land-for-peace deal with Palestinians. Reuters