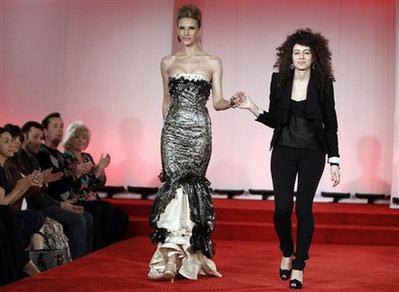 Couture designer Rania Salibi took the nod from America’s fashionistas to win the Oscar Designer Challenge, a competition to design an original gown to be worn on-stage by a presenter escort at the live telecast of the Academy Awards, sponsored by the Academy of Motion Picture Arts and Sciences.

Rania Salibi, a 25-year-old fashion designer who works between Los Angeles and her residence in Chandler, AZ, was among nine competitors who sought the prestigious honor of having their dresses appear before an international audience during the live telecast of the 82nd Academy Awards. Rania was announced the winner of the Oscar Designer Challenge from the Red Carpet during the live Oscar Pre-Show. Jenna, a professional model and official Academy escort, wore the Rania Salibi creation on stage and accompanied the young designer on the Red Carpet during the live announcement of her win broadcast on ABC-TV.

“It’s an honor to be part of the Oscar Designer Challenge,” said Miss Salibi. “The Oscars represent the pinnacle of fashion, and it’s an incredible opportunity for any aspiring, young designer. I am honored to be selected from among a group of truly talented designers.”

Salibi is a Lebanese-American who graduated from Lebanon’s Sagesse High School in 2002 and relocated to Los Angeles in 2005 to pursue her dreams of fashion design. “Living in Lebanon influenced my design perspective towards the Mediterranean and European flavor. I enjoy European art and history and the richness of Mediterranean culture,” said Miss Salibi.