The Lebanese Government and the UNDP: An Unholly Alliance?

by Ghassan Karam
1021
By Ghassan Karam It is not very often that the object of a not-for-profit organization is a major party in funding the effort to help it overcome its challenges.
Share:

It is not very often that the object of a not-for-profit organization is a major party in funding the effort to help it overcome its challenges.  That is simply like taking money from the poor in order to fund programmes that target the eradication of poverty. It just does not seem to be the right thing to do.

I wonder whether many Lebanese tax payers realize that the almost $40 million in expenditures spent by the UNDP during 2008 in various fields and numerous regions in Lebanon were partially funded by the Lebanese government. I bet not many are aware of this relationship that is full of conflicts of interest. What is the rationale for having the recipient fund  the organization that is supposedly delivering the aide? If an organization is comfortable enough as to fund those that are providing it with aid and assistance then maybe that organization does not need the help in the first place.

The following is a scanned page from the web site of UNDP  Lebanon:

Starting 2004 UNDP Progamme Financial Delivery has been expanding from an average USD 7million delivery rate in the early 2000’s to an USD 8.5 million programme in 2004 and USD 11.3 million in 2005. The steady increase continued in 2006 and was complemented with the launching of UNDP Recovery Programme following the unfortunate impact of the July 2006 war. 2008 reached an unprecedented Delivery level of more than USD 38 million expected to be sustained over the coming two years. 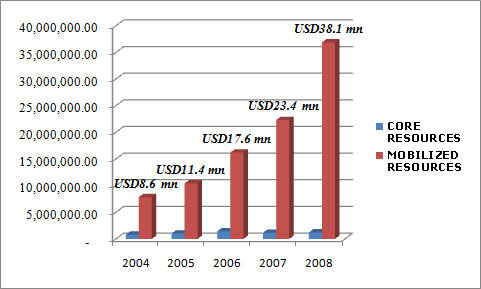 As represented in the graph above UNDP programme Delivery for the 2004-2007 cycle is financed substantially by mobilized resources from Donors and the Government of Lebanon through contributions to UNDP programme and projects activities; as per the below summary table:

There ought to be no doubt in the mind of anyone about the dedication, genuine interest and professionalism of the UNDP staff all over the world. But yet when the UNDP agrees to be funded by those that it professes to help then that is a sure sign that corruption and conflict of interest have found their way into the operation of one of our best and most dedicated organizations. The UNDP , in this case, should not have allowed the Lebanese government to skirt the Lebanese governments’ own constraints on wages and salaries and expenditures in general. The UNDP has allowed itself to be used as an instrument to flaunt local regulations by in essence acting as both an employment agency and a high cost consultancy to Lebanese officialdom that is loathe letting the public know how it is wasting the treasury’s scarce funds.