US administration to block vote on Turkey ‘genocide’ 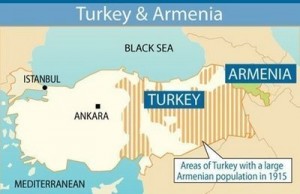 The Obama administration has said it will seek to block a controversial bill describing as genocide the World War I killing of Armenians by Turks.

A congressional panel on Thursday approved the resolution, paving the way for a possible vote by the House.

But US Secretary of State Hillary Clinton said the administration would “work very hard” to prevent this.

Turkey voiced strong protests after the vote and recalled its ambassador from Washington for consultations.

Prime Minister Recep Tayyip Erdogan said his country had been accused of a crime it did not commit, adding the resolution would harm Turkish-US relations.

President Abdullah Gul said Turkey – a key Nato ally of the US – would “not be responsible for the negative results that this event may lead to”.

Mrs Clinton – who had urged the House Foreign Affairs Committee not to hold the vote – said on Friday: “We are against this decision. Now we believe that the US Congress will not take any decision on this subject.”

The resolution – approved by 23 votes to 22 by the committee – calls on President Barack Obama to ensure that US foreign policy reflects an understanding of the “genocide” and to label the killings of Armenians as such.

A similar resolution was approved by the same committee two years ago, but did not go forward to the House after pressure from the George W Bush administration.

Turkey is a major partner in US efforts to stabilize Afghanistan and Iraq, and lies on a key route taking oil and natural gas to Western markets.

Ankara accepts that atrocities were committed but argues they were part of the war and that there was no systematic attempt to destroy Christian Armenians.

During his campaign for the 2008 election, Mr Obama promised to brand the mass killings genocide.

Mrs Clinton has acknowledged his administration’s change of opinion on the issue, saying circumstances had “changed in very significant ways”.

In October last year, Turkey and Armenia signed a historic accord normalizing relations between them after a century of hostility.

Armenia wants Turkey to recognize the killings as an act of genocide, but successive Turkish governments have refused to do so.

Hundreds of thousands of Armenians died in 1915, when they were deported en masse from eastern Anatolia by the Ottoman Empire. They were killed by troops or died from starvation and disease.

Armenians have campaigned for the killings to be recognized internationally as genocide – and more than 20 countries have done so. BBC