Interview:Like Israel Hezbollah should investigate its conduct in 2006 war

by yalibnan
812
Kuwaiti Author Dr. Ibtihal Al-Khatib said during an interview with LBC that like Israel, Hezbollah should investigate its conduct in the 2006 war.
Share: 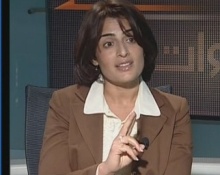 In a TV interview, Kuwaiti author Dr. Ibtihal Al-Khatib spoke out about the danger of mixing religion and politics, and said that Hezbollah should investigate its own conduct in the summer 2006 war.

In the interview, which aired on the Lebanese LBC TV on January 27, 2010, Al-Khatib said: “Any religiously-motivated resistance movement scares me.” Citing as an example Europe in Crusader times, she said that Europe only became stable when the Church relegated its role to spiritual guidance, and became isolated from politics. The Arab region is volatile “due to the mixing of religion and politics,” according to Al-Khatib. “If the leadership is Sunni, the Shi’ites are repressed, and if the leadership is Shi’ite, the Sunnis are repressed. This repression leads to instability, which, in turn, leads to revolutions.”

About Hezbollah’s conduct in the summer 2006 war, she said: “If I suffered any losses in this war… I should investigate what went wrong,” instead of declaring a “divine victory,” holding victory celebrations, and passing out sweets.

In the past, Al-Khatib has weighed in on similar issues, criticizing Hezbollah’s role in the war and saying that secularism in the only way to protect religious rights in the Arab world.

I Label Myself as Kuwaiti, Not as Shi’ite, Because Spiritual Beliefs are Personal

Ibtihal Al-Khatib: “You presented me as a Shi’ite, but I always present myself as a Kuwaiti. I don’t make my spiritual beliefs public, because this is a personal matter. This is a matter of principle for me, in order to emphasize the private nature of one’s spiritual beliefs.”

Interviewer: “I thought you would object to me calling you a Shi’ite, and say that I should call you ‘a Muslim’ – not a Shi’ite or a Sunni.”

Ibtihal Al-Khatib: “No. Just a Kuwaiti.

“The country should accept all its religions. Egypt, Lebanon, Kuwait – the different sects living in these countries should be able to feel as equal citizens: Kuwaitis, Christians, Muslims, secular people…”

Interviewer: “Does your country negate your religion?”

Ibtihal Al-Khatib: “If the legislation is religious, then yes, definitely. It attacks your belief, if it does not conform with what is prevalent. That’s why I always say – and this is a matter of principle for me – that I do not label myself spiritually, because this is between me and my creator. I label myself only as a Kuwaiti.”

Interviewer: “I respect your opinion, of course.”

Like Israel, Hezbollah Should have Scrutinized Its Own Conduct in the War

Interviewer: “Why are you demanding that Hezbollah be investigated?”

Ibtihal Al-Khatib: “I thought an investigation should be initiated from within Hezbollah itself, and by the people supporting Hezbollah more than by its opponents. If I suffered any losses in this war – even if I consider myself victorious – I should investigate what went wrong, and how we could have avoided the loss of life, of property, and so on. This did not happen. Instead, there were victory [ceremonies]. A ‘divine victory’ was declared, and sweets were passed around.

“They gave the victory precedence over self-scrutiny, despite all the losses suffered by Lebanon. They should have first acted like Israel, which scrutinized itself, even though it suffered fewer losses in terms of lives and property. Hezbollah should have examined itself as well, and seen what went wrong.

“The Winograd Report acknowledged the Israeli losses, and I greatly respect this approach – as an approach, not because it was done by Israel – because self-accountability is the first step to success. If this report had glorified Israel, I would have said it was nonsense. But this was true self-scrutiny, in an effort to calculate future measures. Hezbollah should have done the same thing.

“At the time, I thought that the decisions made by Hezbollah were wrong, and that they deviated from the framework of the state of Lebanon. It was as if Hezbollah had become a state within the state.”

When Spiritual Belief Takes Precedence over Politics, This Leads to Bloodshed

Ibtihal Al-Khatib: “Any religiously-motivated resistance movement scares me, because religious motivation excludes all other approaches.

“Look at Europe, with all its Crusader movements, and the pure Christian movements, for the liberation of lands, and the spreading of Christianity. All these movements have led to bloodshed, and ended up with nothing. The religious movements…”

Interviewer: “Whose fault is this?”

“The motivation of Hamas, for example, is religious. It believes that the Muslims will ultimately emerge victorious, and that the Jews will be vanquished. How can Israel and Hamas possibly conduct any dialogue? There is no room for dialogue.

“This holds true with regard to Israel as well. Israel is a racist country, because it was established on Jewish religious foundations. Maybe there is a secular approach in the country today, and they try to separate… Their beginnings, however, are Jewish. This mutual slaughter will never end.

“Europe is the best example for this. They conducted religious wars for centuries, and eventually even the Church realized that this was pointless. You cannot force… I always say there are two things you cannot impose on people: faith and love. You cannot force somebody to love you or to believe or not believe in something.

Ibtihal Al-Khatib: “Let me finish. Today, Muslims and people of other faiths take refuge in Europe. There, they feel safer and more stable than in their own Islamic countries. They immigrate to places with work opportunities and freedom of speech, and even the freedom of belief that they lack in their own countries.

“People who are persecuted in their own countries – whether economically or in terms of their religion – emigrate to countries of the so-called ‘infidel West,’ in order to have room to breathe economically, socially, or even in terms of their religious practices. This is the best evidence of what I am saying. People think that I am calling for separation of religion and society, and that I don’t want religion in society at all. It is naïve to say this.”

We Need to Conduct Dialogue with Israel Now

Interviewer: “Do you support peace with Israel?”

Ibtihal Al-Khatib: “This is a very sensitive issue. I meant to write about this in my next column, following a conversation I had with my father. I told him that we need to conduct dialogue now. The Palestinians have been dying for a hundred years, and perhaps the time for dialogue has come, so that Palestinian society will be able to build itself, and so that their children will be able to live and study, and will have better opportunities than this continuous slaughtering.”

Interviewer: “Do you think that the Israelis might accept dialogue, although they too subscribe to the principle of using force?”

Ibtihal Al-Khatib: “Look, they are the stronger party at present, and the Palestinians are the weaker party internationally.”

“We Should Be Conducting Resistance in a Smarter Way”

Interviewer: “So we should give in?”

Ibtihal Al-Khatib: “Absolutely not. We should conduct resistance, but in another manner. In my view, we should be conducting resistance in a smarter way.

“Take, for example, Japan following World War II, when the nuclear bombs were dropped on the two Japanese cities. Japan surrendered, saying: We lost the war, and the U.S. won. We will not hold a grudge. We will not become obsessed with it. It began to rebuild itself, and today, Japan has become a main economic threat to the U.S. It rebuilt itself technologically and economically.”

Interviewer: “But Palestine and Israel are different from the U.S. and Japan.”

Ibtihal Al-Khatib: “These are different cases. But what I am saying is that we need to abandon the collision course we are on.”

Interviewer: “Why do some Arab and Muslim countries reject Shi’ite ideology?”

Ibtihal Al-Khatib: “First of all, I think that it is the ideology of the minority – not necessarily in terms of numbers, but in terms of political strength, just like the Sunni ideology is repressed in Iran. Due to the mixing of religion and politics – if the leadership is Sunni, the Shi’ites are repressed, and if the leadership is Shi’ite, the Sunnis are repressed. This repression leads to instability, which, in turn, leads to revolutions. That is why this region is volatile.” MEMRI