by yalibnan
683
I’m sometimes haunted by weird thoughts, rash feelings, and a hasty desire to celebrate. It is as if I hadn’t become more knowledgeable or learned my lessons.
Share: 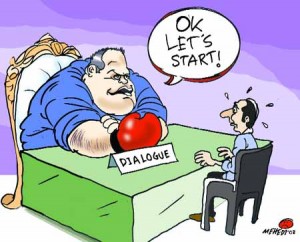 I’m sometimes haunted by weird thoughts, rash feelings, and a hasty desire to celebrate. It is as if I hadn’t become more knowledgeable or learned my lessons. Perhaps it is desperation, which drives a drowning man to hang on to any straw, despite past experiences and experiments.

Some news affects you to the core and awakens your suppressed nationalism. I rejoiced at the announcement of the reformation of the national dialogue committee. The formation itself represents a conquest in the world of fashion. I told myself I won’t ruin the happy moments with observations and I won’t delve into the archives of the trustees of the future. Who knows, maybe if I had, I would’ve come across calamities. I quiet the journalist inside me. This is my country, and I have to be positive and polite. Moreover, these stones are from this quarry. You cannot launch a national dialogue with imported stones. I liked this nod to civil society. I like civil society; the Green party; the environment supporters; and the party of astronomers that dominate Lebanese TV stations. I hope that the astrological signs of participants did not play a role in their selection. I also like the syndicate of sugar beet farmers; the association for the preservation of butterflies and finch birds; the syndicate of writers; and the association of contrite people.

I heard the news so I went out to the balcony. I thought the Lebanese would take to the street in spontaneous celebrations and dabke dancing, and that young politicians would be carried on the shoulders of desperate citizens. I thought they would say extremely optimistic speeches, they would declare that the Lebanese love each other, that talking about problems among them need a deep dialogue that has no basis; and that is is nothing but a poisoned meal prepared by the kitchen of the Mossad and its allies.

I imagined the women showering the celebrants with rice after uttering cries of joy, and the tears of the national unity drowning the streets and filling their many holes. I imagined the Beirut airport suffocating from the large number of planes, and the Lebanese whose grandparents had emigrated to Brazil, Argentina, and Africa, being so affected by the news that they packed and returned with their children. I imagined the members of the dialogue committee welcoming those who returned, united like serried constructions; the sound of fireworks resounding across the Lebanese republics, along with shots of joy fired.

What I had expected did not happen. The public disappointed me, as if they knew the story. I felt down. The thought crossed my mind that the dialogue committee was there and did not produce anything that would make a heart rejoice or keep away grievances; that the dialogue has been open since the birth of that unfortunate entity; that the Lebanese were leaving the dialogue table almost every decade, in order to wage a civil or a civil-regional war. They always came back to the dialogue and reconstruction table, and awaited the imminent collapses.

It was a beautiful night indeed. Luckily the night is not dependent on the national dialogue; nor are the seasons. There are strange smells in the air: the smell of a national dialogue whose proceedings and mental and linguistic gymnastics will entertain the media. There is also the smell of national contempt that cannot be hidden – contempt for the ordinary citizen and his right to life, stability, and services. I do not exaggerate. When all the forces come together in a national unity government and paralysis results from this celebration, we are entitled to talk about comprehensive national contempt. It is a government that gathers all the actors and stakeholders and is unable to appoint an employee or take a decision. It is a government that has rapidly turned into a mere forum for national dialogue. What is said about the government can also be said about the respectable parliament, as it suffers from the chronic disease of dialogue. There is also a third smell, that of national death. I do not exaggerate. The visitor feels that something is dying in Lebanon. The absence of decision and the surrender to the permanently paralyzed dialogue and definite contempt open the doors wide for the death of some of the country’s essential features. The dialogue’s situation in the media does not conceal the divergence in discourse and feelings among the Lebanese factions following the deep changes and violent seisms that have shaken Lebanon. Dar al Hayat