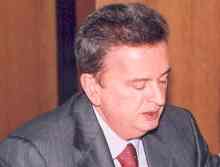 “We have an objective of keeping inflation at 4 percent and we want to absorb excess liquidity that could cause an increase in prices,” Salameh said in a telephone interview from Beirut today. “We want also to prevent speculation, especially in real estate, as too much liquidity could cause that.”

Lebanese banks are receiving more than $1.5 billion a month from abroad, attracted by interest rates on deposits in Lebanese pounds at about 7 percent and the country’s fixed exchange rate. The inflow of funds has left the commercial banks with a problem — what to do with all the money.

The central bank brought down the overnight lending rate to 2.75 percent from 3.25 percent today to try and lower rates and curtail the inflows, Salameh said.

The central bank stopped issuing certificates of deposit in July of last year.

The decision to renew the sales came after the Ministry of Finance temporarily stopped the issue of treasury bills this week as it has enough money to cover its short-term fiscal needs, Salameh said.

The halting of treasury bills “doesn’t hide the fact that the government still has large financing needs,” said Nassib Ghobril, head of research at Byblos Bank SAL. “If the government had implemented reforms that would have engaged the private sector then the banking industry would have used this surplus liquidity to finance these projects.”

The budget deficit reached $2.96 billion in 2009, compared with the government’s forecast of $2.94 billion, or 9.4 percent of gross domestic product. This year’s budget has yet to be submitted to the cabinet. The deficit will be close to that of 2008 and 2009, Finance Minister Raya Haffar el-Hassan had said in a Dec. 12 interview.

Prime Minister Saad Hariri’s government, which was formed in November, has to finance public debt that reached $51 billion, or about 156 percent of GDP, at the end of 2009. BW