Breast cancer may be prevented by bitter melon 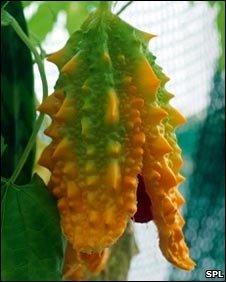 Scientists found key ingredients of the green and knobbly bitter melon fruit interfered with chemical pathways involved in cancer growth. It turned off signals telling the breast cancer cells to divide and switched on signals encouraging them to commit suicide.

Although promising as an anti-cancer agent, trials in animals and then humans are still needed, study co-author Dr Rajesh Agarwal from the University of Colorado, US, said, adding there is no proof that eating lots of bitter melon would offer any cancer protection.

Bitter melon, sometimes called bitter gourd or wild cucumber, is grown in Asia, Africa and South America. Its extract has been used for many years in folk medicines as a remedy for diabetes and infections. The latest findings suggest it may have a role in cancer prevention. The researchers hope, ultimately, the extract could be used as a dietary supplement for breast cancer patients to stop disease recurrence.

Jessica Harris of Cancer Research UK said: “Many plant chemicals can kill cancer cells in the lab but very few end up as useful cancer drugs.

“It will take a lot more work and trials in people before we know if this extract could benefit cancer patients or about any unwanted side effects. Many cancer treatments have been developed from plant chemicals, but only after years of thorough research. The most up-to-date, reliable evidence shows that drinking less alcohol, being physically active and keeping a healthy weight can reduce the risk of breast cancer.”