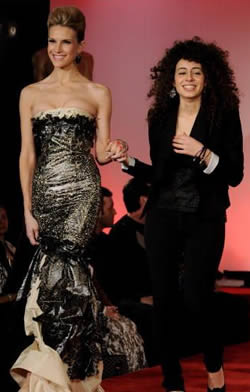 Two up and coming designers with roots in Lebanon will be competing in the “Oscars Designer Challenge 2010”, a competition to have the winning dress worn during the Oscars ceremony.

Rania Salibi is a Lebanese-American who graduated from Lebanon’s Sagesse High School in 2002. Salibi relocated to Los Angeles in 2005 to pursue her dreams of fashion design. “Living in Lebanon influenced my design perspective towards the Mediterranean and European flavor. I enjoy European art and history and the richness of Mediterranean culture.”

Hagop Ari Sheuhmelian the designer behind the couture house of Pogah. The origins of Ari’s artistic expression came together through his upbringing in both Lebanon and Syria.

Ari first studied at the American University of Beirut where he received a Masters Degree in International Marketing and a BA in Business Administration. Seeking to express his creative vision, Ari enrolled in the fashion design program offered at ESMOD (Ecole Superieure des Arts et Techniques de la Mode) in Paris, France. Ari was taken in by the renowned house of French couturier Dominque Sirop, while also establishing his own name Syria.

Pogah (Hagop spelled backwards) offered both couture and prêt-a-porter trunk shows in the Middle East, which have earned him a well deserved and strong reputation for beauty and craftsmanship. Ari was awarded the first place award in the UNESCO Design 21 international competition for new designers, at EXPO 98 in Lisbon, Portugal.