Former US Secretary of State Haig Dead at 85 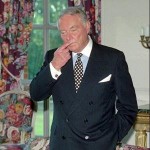 Alexander Haig, who managed the Nixon administration during the Watergate crisis and served a controversial stint as secretary of state under President Reagan, died on Saturday. Haig who  sided with Israel against Lebanon  resigned  in July 1982, barely a month after the  Israeli  invasion of Lebanon , saying he could not work with an administration that ran competing foreign policies. ( In reference to former  Vice President George Bush and National Security Adviser William Clark who opposed the invasion)